The Chimpanzee: Habitat and Characteristics 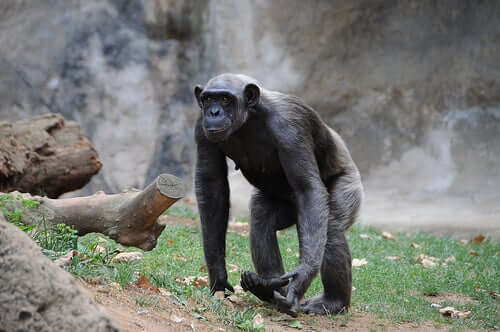 The chimpanzee is the animal that is genetically closest to the human species, but it also has a less well-known and very interesting social life.

Characteristics of the chimpanzee

This species can weigh up to 132 pounds in the case of males, and females will weigh a little less (110 pounds max). This species walks and stands in an upright position and can be 3.3 to 4.6 feet tall. However, their arm span is approximately 1.5 times the height of each individual, being much larger than that of the human species.

The chimpanzees’ arms are very long. This allows this species to move with great balance on all four limbs or even by bracing itself between the branches of trees.

Similar to humans, they have opposable thumbs. This allows them, along with their great intelligence, to use different tools very proficiently. In addition, their big toes are also opposable, which makes their feet very versatile.

Chimpanzees mate throughout the year and their pregnancy is similar to that of the human species. It normally lasts around 8 months. The young are weaned between 4 and 5 years old, but take several more years to become independent. As a result, they reach puberty at around nine years of age. Nevertheless, it should be noted that a chimpanzee can live up to 60 years.

As for their feeding habits, their diet is mainly vegetarian. However, they may sometimes eat some meat. In fact, chimpanzees have surprising hunting techniques for catching other primates like Colobus. Their top predators are leopards, crocodiles, and snakes, but their biggest threat is human beings.

The chimpanzee is considered to be a primate exclusive to the African continent and its distribution has been greatly reduced in the last few centuries. This species is closely linked to trees, as it normally lives in tropical rain forests and savannah forests. Currently, each subspecies occupies a niche in the continent:

Chimpanzees live in groups known as ‘fission-fusion’ societies. In this kind of group, reproductive behavior is promiscuous and the combinations and number of its members vary. They can live in groups of 20 and up to 150 members.

In this species, the males usually carry out patrol tasks. They also compete for leadership based on strength demonstrations. However, given their tremendous intelligence, this isn’t always the case. Males maintain and improve their social ranks by forming coalitions.

We’ve also seen leaders who weren’t particularly strong, but who knew how to make a good impression. Primatologist Jane Goodall observed how one chimp, weaker than the rest, came to power using camp drums. As a result, he was able to make a very loud noise that he imposed on the rest.

Regarding their character, it should be noted that chimpanzees are quite aggressive animals. Experts have observed merciless wars between different groups. However, they have also observed enormous empathy, a sense of justice and demonstrations of real pain for the death of members of the group in other cases.

This species has been heavily exploited as a pet. They have also been hunted for their meat and affected by diseases such as Ebola. In addition to the fact that human beings have used them as pets, they’ve also been used as circus animals or even as actors.

This is in part due to the chimpanzee’s resemblance to humans. In fact, one of the things that people have most exploited from is their “smile”. However, when a chimpanzee “smiles” like a human it means they’re terrified, not happy. Unfortunately, it’s something we see in circuses and movies all the time.

Given their intelligence and the number of years they live with their parents (eight years in total), the premature separation they suffer because of these activities is traumatic. After all, their mother-child relationships are very similar to human ones.

In addition, they don’t receive all the learning and socialization they normally need during their childhood. They usually stop working in these places at the age of six (because their tremendous strength is dangerous). This means that they live for more than 40 years without being able to relate to other individuals.

This is why at present there are many animal rescue centers in our country, which you can visit to learn the sad stories of some of these chimps. Awareness is the key, in order for us to be able to change our behavior and our actions towards mother nature and everything that lives in her.

Chimpanzee Culture is Disappearing
Have you ever heard of animal culture? Well, they have cultures and chimpanzee culture is in danger of disappearing. We'll take a closer look! Read more »
Link copied!
Interesting Articles
Birds
Lesser Kestrel, the Smallest of the Falcons