Meet The Bonobo: Behavior and Characteristics

Bonobos are highly social animals, living in large communities of up to 120 individuals. 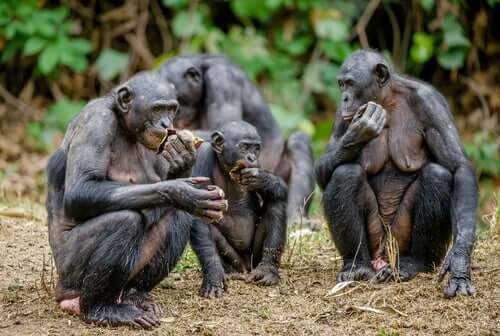 The bonobo is one of the lesser-known species of primates, and one of the most fascinating. Gorillas, chimpanzees or orangutans are pretty well known worldwide. However, the ‘dwarf chimpanzee’ isn’t as popular yet.

This species is yet another member of the great ape family. The reason for this classification may be its resemblance to the chimpanzee. However, other factors could be the low impact its first discoveries had on the scientific community or its behavior. The latter, according to scientists, is too explicit for many zoos or documentaries.

The bonobo and its features

Physically, the bonobo looks a lot like the chimpanzee, but is smaller. It has a wider forehead and a black face with pink lips. The breasts of females are quite prominent when compared to those of chimpanzee females.

Morphologically they have a slimmer build, weighing about 75 to 132 lbs for males, against an average of 66 lbs in females. They also possess longer legs and can be up to 3.2 feet tall. In addition, bonobos walk upright 25% of the time so they give the feeling of a greater physical resemblance to humans.

The 10,000 bonobo specimens that still exist on our planet live in the jungles of the Democratic Republic of Congo, in Central Africa. This species has suffered a great habitat loss in addition to the influence of illegal trafficking. This is, in part, due to the fact that members of high society in that country consume their meat, which is considered a delicacy.

The Democratic Republic of Congo has endured wars that forced military personnel to remain in the jungle for months. This situation has led to them to hunt and eat bonobo meat for survival. Especially after the first and second Congo wars. As a result, the bonobo’s loss of habitat and decreased population also has its roots in these conditions.

Historically, there haven’t been many bonobo conservation projects in its habitat. This is perhaps because of the unpopularity presented by a species which has so many taboos for humans. In addition, Congo is one of the areas in Africa where there is a great conflict between the interests of indigenous communities and natural parks.

Luckily, in recent years conservation projects have begun to be developed in which local populations have a central role. As a result, local inhabitants have the opportunity to generate a positive perception of this species and thus create awareness about their critical situation.

Bonobos have very complex behavior patterns. However, scientists have especially discovered a very gentle and altruistic nature in them. Experts claim that these primates are capable of aiding and supporting other animals they’re not familiar with without expecting anything in return.

Unlike chimpanzees, who wage wars with other groups with which they share territory, bonobos from different groups are often treated as friendly neighbors. This species usually resolves conflicts in a very particular way.

Bonobo societies are matriarchal, which means females lead the groups. In these communities, there’s a fairly egalitarian society where strength and domination are put to one side in favor of other ways of relating.

Aggressive encounters between males and females are rare, and males are tolerant of infants and juveniles. Bonobos exhibit remarkably different social behavior from chimpanzees, with an emphasis on peacemaking.

These primates use sexual intercourse as a kind of exchange ritual. As a result, sexual activity plays a major role in their societies. Some scientists believe bonobos can use sex as a greeting, a means of conflict resolution or for post-conflict reconciliation.

In addition, part of their observations includes the fact that bonobos practice sexual intercourse much like humans do, displaying different positions and such. The bonobo society has few taboos in this regard, and they don’t rule out assiduous same-sex relationships as a way of strengthening ties between males or females of a group.

In fact, it’s a very common practice in situations like when they find a new food source. Bonobos use sex, in this case, to ease tension as an alternative to violence shown by other species in the face of similar problems or situations.

Undoubtedly, bonobos are a species with very peculiar behavior and yet very similar to human nature. Let’s hope it’s not too late for them and that more efforts can be done to preserve the species.

Meet 8 Amazing Monkey Species
Currently, there are about 260 monkey species in the world. Today, we'll be talking about the most famous ones in Europe, America, Africa and Asia. Read more »
Link copied!
Interesting Articles
Mammals
What Are the Differences Between Jaguars and Leopards?