These birds of prey are nocturnal. They hunt their prey with great stealth. 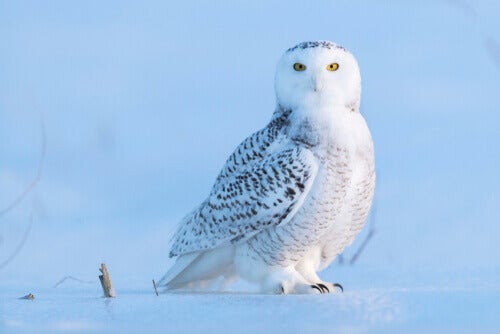 Unlike barn owls, true owl species have ear tufts covered by feathers on top of their heads. In this article, we’ll tell you about some of their traits.

How many true owl species are there?

Within the order of nocturnal birds of prey, we can find the Strigidae family, better known as true owls. These in turn are divided into five genera, and the genus Bubo is the most “famous”. However, the largest owl is of the genus Glaucidium (pygmy owls) encompassing 35 species. Here are some species of owls:

1. Snowy owl: a true owl from the Arctic

Also known as the white owl, it measures about 65 cm (26 in) in length and, its wingspan reaches 150 cm (59 in). The male has white feathers all over its body, while the female has black or gray spots on the chest and wings. In both sexes, the eyes are yellow, and the beak seems “hidden” among the feathers.

The snowy owl –photo at the beginning of this article– lives in the cold areas of Europe and America, and chooses the tundra as its habitat. Its diet is quite varied, and includes fish, hares, and other small animals that it hunts in flight. Finally, this species became famous thanks to Harry Potter, as his owl Hedwig belonged to this species.

This large bird of prey lives in Europe as well as in Asia and Africa. More specifically, it lives around the Mediterranean and in the Iberian Peninsula. This species is a good option for falconry due to its easy breeding and its majestic look.

The Eurasian eagle owl has two ear tufts on each side of the head, forming a “V” between the eyes with orange irises. The feathers are brown, black and gray, with the belly lighter than the wings. It’s a solitary bird and only comes together to breed. Lastly, it builds nests on the ground or in tree trunks, and from winter to spring the female lays six eggs.

Another of the large owl species is the milky eagle owl. This bird can measure about 70 cm (28 in) in length, with a wingspan of 2 m (6.5 ft), and weighs about 4 kg (9 lb). It’s easy to recognize due to its pink eyelids, dark eyes and ears tufts or “horns” on the sides of its head.

The feathers of the milky eagle owl are pale gray on the belly and dark brown on the back. It’s a nocturnal hunter feeding on hares, mongooses, rats and pigeons. It roosts on tall trees south of the Sahara (Africa), near riverbeds and streams.

Also known as the tiger owl, it’s an American species, inhabiting regions from Alaska to Argentina. It’s the largest owl on the continent. It can weigh 1 kg (2 lb) and measure about 60 cm (24 in) in length, with a wingspan of more than 1.5 m (59 in). In addition, it has a robust build.

Its plumage is striped, in shades of black, orange and brown. It has the typical ear-tufts above the eyes –which have yellow irises– and a white mark on the neck. It’s widely used for falconry.

The last of the owl species on the list is of medium size –45 cm (18 in) in length and 850 g (2 lb) in weight –and inhabits the Middle East and Africa, from Gabon to Arabia. It prefers areas near the Sahara, frequenting rocky areas, open forests, and farmland.

Also, its feathers are chestnut-brown on the back and whitish with chestnut stripes on the front. In addition, its eyes are yellow, and it has two dark ears tufts on each side of its head. Finally, the spotted owl hunts at night and its diet consists of birds, insects, reptiles and small mammals.

European Owls: The Nocturnal Raptors
Raptors are majestic birds that wander the skies in search of prey. Today, we want to focus on owls, the nocturnal raptors. Read more »
Link copied!
Interesting Articles
Wild Animals
5 Animals that Live in Grasslands