Discover the Fauna of the Arabian Peninsula

As the Arabian Peninsula is mostly desert, the animals that live there have to adapt to intense heat or water scarcity. 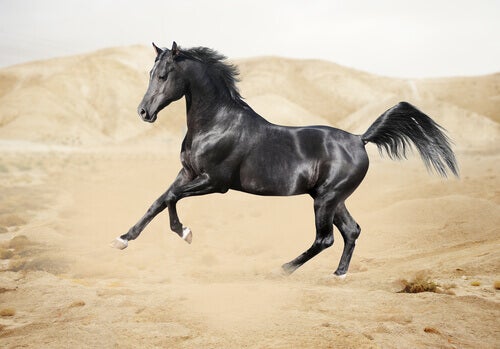 The ability of some species to survive in inhospitable habitats such as deserts is striking. Despite what you may think, the fauna of the Arabian Peninsula consists of dozens of animals. We’ll tell you about some of them in this article!

Discover the fauna of the Arabian Peninsula

This area is located in northeast Africa and Western Asia. It’s comprised of Muslim countries and bordered by the Persian and Aden gulfs, and the Red and Arabian seas. It has a predominantly desert climate. The fauna of the Arabian peninsula consists of several mammals, birds, and reptiles. We decided to highlight the following:

Known for its beauty, resistance, and intelligence, the Arabian horse, featured in the main image of this article, is one of the most famous horse breeds in the world. In addition, it’s one of the oldest horse breeds, since there’s evidence that it dates back 4,500 years.

First used by Bedouin nomads, they get along great with humans, learn quickly, and respect their owners. However, the Arabian horse also has a strong character and is always alert.

Although it can come in various colors, the most beautiful is completely black. This horse always holds its tail high. The Arabian horse is a warm-blooded animal and is refined and strong.

This mammal of the bovidae family is the smallest of them all and the most endangered. This ruminant, which is part of the fauna of the Arabian peninsula, can also be found in the Sinai. However, its population has decreased considerably due to hunting and wars.

Its body is white except for the legs, the sides of the face, and the horns, which are dark. Unlike other species, both sexes of Arabian oryx have horns, which are ringed, straight, long, and tipped. The animal uses them to defend itself.

This animal feeds on fruits and bulbs and, like camels, can go weeks without drinking water. The breeding season occurs between the months of May and December. The female only produces one calf. At 10 weeks, the calf stops feeding on its mother’s milk.

We just had to mention this dromedary in the list of the fauna of the Arabian Peninsula. It has a single hump, its coat is short, and its body is less robust than the most famous desert species, the Camelus ferus.

The Arabian camel has long, thin legs, with calloused knees and ankles. This allows it to withstand the burning sun and the heat of the sand. Its long, thin eyelashes protect its eyes from sand in storms or strong winds. Likewise, its hump stores fat, not water as it’s believed, to nourish itself for several days.

This bird is part of the fauna of the Arabian peninsula. It can also be found in central Africa or the Sahel. Its widespread distribution has allowed it to avoid becoming endangered or vulnerable. However, the population has decreased considerably in recent times due to hunting and the destruction of the habitat.

The Arabian bustard shows sexual dimorphism both in size and weight. However, males and females differ in plumage and coloration. The males weigh about 22 pounds and measure almost three feet. Females don’t exceed 15 pounds and measure less than 27 inches.

The upper feathers are brown and the lower feathers are white. The head has a black plume and its neck is gray. It feeds on larvae and arthropods, which it catches with its long, sharp beak. The Arabian bustard looks like a small ostrich.

This scaly reptile doesn’t only live in Arabia, but also in South Asia and North Africa. It feeds on both vertebrates and invertebrates. For example, rodents, birds, amphibians, small reptiles, eggs, insects, spiders, centipedes, and scorpions.

Its body is brown, gray, and yellow, and it can be three feet long. Nevertheless, this length can vary depending on the time of year. They shed several times throughout their lives. As they’re cold-blooded, they spend hours lying in the sun.

All About the Siberian Fauna
Life can exist even in hostile environments like Siberia. The Siberian fauna is quite vast, and there are species that can only live in this region. Read more »
Link copied!
Interesting Articles
Mammals
Egg-Laying Mammals