Discover Which Animals Use Echolation

Thanks to the emission of sounds and their subsequent interpretation of the echo they project on nearby objects, animals that possess echolocation are able to orient themselves in the air, in the dark, and in the sea. 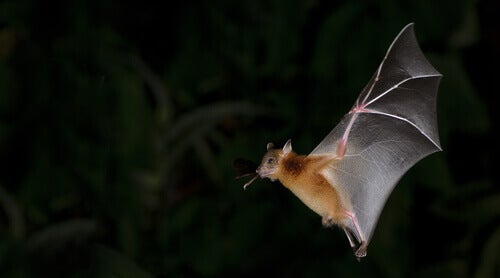 Have you ever wondered how certain animals locate themselves in the sea or in the sky? Several scientists have asked themselves the same question before coming up with the term echolocation. Today, we’ll tell you which animals use echolocation, and how it works.

Echolocation: A technique for interpreting surroundings

Echolocation is a specific ability that some animals use to get to know their surroundings, identify dangers, and find prey.

This term was first used in 1938, after several studies on bats. It’s worth noting that not all bats of the family Chiroptera use this mechanism. Dolphins, sperm whales (both cetaceans), and some birds such as the swift, the salangana, and the guacharo also use echolocation. Ships and submarines rely on this principle to navigate.

Echolocation is easy to understand. Take the bat, for example, which has very poor eyesight and hunts at night. Thanks to this mechanism, it can find food and also avoid various obstacles, such as a tree or a predator.

Thanks to this localization system, it’ll know how far it is from an object. How does it know this? It calculates the time delay between when it emits the signal and when it’s received again.

But, of course, it’s much more than that. Because, in order to decode this message, animals need to have special anatomical features. In the case of bats, their ears are placed at a certain distance from each other. This allows them to better understand what’s happening around them.

The other most well-known example of echolocation is that which dolphins (and sperm whales) perform. In this case, they do so by emitting a range of sounds, which travel through the water. This allows them to obtain a lot of information about their surroundings.

Through sound impulses – known as clicks – of high or low frequency, a dolphin can find its prey and also meet up with its congeners. To do so, they obviously need sensitive directional hearing and superior intelligence.

If we analyze the physiognomy of this cetacean, we can see that it has a layer of oily blubber on the sides of its head and lower jaw, which allows it to receive echoes. When the dolphin swims, it moves its skull sideways, up and down. By doing so, it ‘scans’ its surroundings.

And what about birds?

Although the two most famous cases of echolocation are the bat and the dolphin, some birds have also learned this technique to orient themselves. The swift is similar to the swallow (although they’re not related) and has been able to develop a mechanism that allows it to know where it is in the dark, as it sleeps in caves.

The Papuan swiftlet is a native bird of New Guinea capable of echolocation when flying outside its shelter. It also differs from other species because it emits single clicks and not double clicks, as is the case with relatives of the genus Aerodramus.

Finally, guácharos, or oilbirds, are frugivorous and nocturnal. They use echolocation to navigate in poor visibility conditions. Together with their great sense of smell, they can feed on fruits before the sun rises. During the day, they shelter in deep caves and, as soon as they wake up, they activate that special GPS that includes high-frequency clicks that are audible to humans.

Curious Facts about the Narwhal: the Swimming Giant of the Arctic
The narwhal is a big cetacean that stands out for the enormous tusk that it uses for echolocation, defend itself, pierce ice, and detect prey. Read more »
Link copied!
Interesting Articles
Amphibians
The Differences Between Toads and Frogs