This bird is capable of reaching no less than 170 km/h (106 mph), and can fly for 20 months without stopping. It can feed, sleep and copulate without stepping on solid ground. 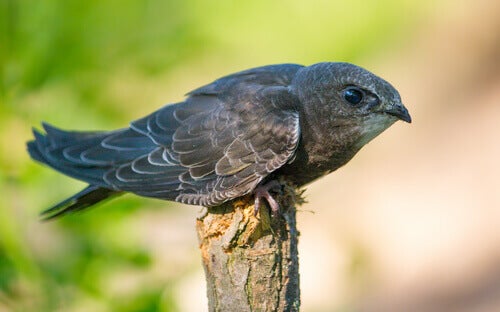 We could say that the little swift is a true “record holder”, as there are several characteristics and habits that make it worthy of a Guinness prize. Find out everything about this small but very fast bird in this article.

Traits of the swift

This is a small bird –about 17 cm (7 in) long with less than 50 cm (20 in) in wingspan. It has a divided tail, curved aerodynamic wings –looking like a crescent in flight– and short legs without claws, but very strong gripping on vertical surfaces.

The beak of the swift is very small, its plumage is black with white or grey spots on the neck, which can only be distinguished from up close.

Behavior and habitat of the swift

The scientific name (Apus) of this bird tells us something very specific about its behavior. Apus means “without feet”, and it refers to its aerial habits. It spends very little time on the ground or any other surface.

This fast little bird can eat, sleep, and even copulate in the sky. The swifts only stop to lay eggs, incubate them and raise the chicks. They “learn” from one day to the next how to spread their wings, and leave the nest –located on high cliffs or walls– when they’re very small.

One of the particularities of this bird is that it can predict thermal drops and stormy areas, and thus change its course. They also go around the “bad weather” and return to the initial route after the rain or snow has passed. Many researchers believed that they actually lose their way and become disoriented, but it was later found that they can deviate by hundreds of kilometers to avoid bad weather.

There are two subspecies of swifts: one that lives in Europe, Africa and Asia, which winters in Southern Africa, and another that lives in Asia (Iran, Mongolia and China), but travels to Eastern Africa during the cold months.

Once they choose the brood site, it’s likely that the couple –they’re monogamous– will return each season. In the event of the home being partially or totally destroyed, they’ll repair or build it from scratch.

The swift has only one breeding period per year. Each female lays a maximum of three eggs, and incubates them for three weeks. Once the chicks are born, they stay in the nest for no more than two months. Also, they can endure several days without parental presence as they reduce their heart rate and temperature. Finally, when they leave the nest, they never return.

At that stage, they’re about 7 grams (0.25 oz) heavier than their parents. The fat reserve helps them face the first difficulties they’ll have in their aerial life. The development of the offspring depends on the temperature of the environment.

In their second year of life they’re sexually mature. This is counted from the time they leave the family home until they form their own couple. They can remain in the air for about 20 months without landing anywhere!

As for their feeding habits, they catch flying insects with their beak, which always remains open. Sometimes, they chase clouds of mosquitoes, flies, or any other flying invertebrates. They also use this technique to acquire the necessary materials to build or renovate their nest.