Kissing is almost unique to human beings, but some primate species also use it as a means of intraspecific communication. 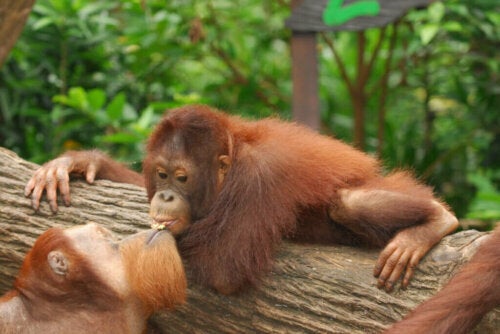 The kiss is the gesture that we humans use to express attraction or affection, but does it exist in other species? In the animal kingdom, different signs of affection between couples and family groups have been observed, but only some animals kiss, like in the case of certain primate species.

Even if it’s generally considered a universal fact, the romanticization of the kiss is a product of the Western society. It’s shocking to know that, even within our own species, there are cultures that don’t kiss, and a significant part doesn’t consider kissing a romantic gesture.

Is kissing a natural instinct or learned behavior?

Scientists are still debating whether kissing is an innate or learned behavior. A large part of the human population kisses, which shows that it’s a fairly widespread act, but not universal. If we speak of romantic kissing, the number of “kissers” who use it in a sexual fashion, drops even more.

If kissing were a natural behavior, surely all cultures would do it, but there’s a minority that doesn’t kiss due to superstitions and cultural beliefs. Even so, these ethnic groups engage in affective behaviors similar to kissing, such as rubbing their noses.

This shows that there are many more ways of showing affection apart from kissing.

If we look in the animal kingdom, we’ll see that kissing is even more unusual. Most animals don’t kiss as such, but many of them exhibit similar affectionate behaviors such as licking, hugging, touching faces, and many other habits of social approach.

However, there are animals that kiss just like us: the bonobo and the chimpanzee. This isn’t too surprising if we consider that we share 98.7% of our DNA with them.

For chimpanzees, the kiss is a form of reconciliation after a conflict. Hence it’s more common in males than in females —as they’re more aggressive and fight more often. In spite of this, the act of kissing doesn’t seem to be a romantic behavior like in the case of humans.

In bonobos it’s different, as they tend to kiss frequently and even use their tongues. This isn’t surprising, as they’re highly sexual animals that use sex as a means of communication within the group.

Why don’t other animals kiss?

From what we know so far, the rest of the animals don’t kiss. They may rub or touch faces, but not even animals with lips share saliva nor join their lips.

Kissing may not be a purely human act, but the romance behind it is unique to our species. Animals don’t need kissing to find a compatible partner, because, in nature, chemical signals are more useful than kissing.

Pheromones are chemical substances secreted by living beings, capable of provoking specific behaviors in other individuals of the same species. They’re key to finding a partner in the animal world and are recognized by smell. There are different types of pheromones that can indicate different messages: territory, alert, calming or sexual stimulant.

When it comes to finding a reproductive partner, animals don’t need to kiss nor even be close to each other. Animals can detect pheromones from far away by smell, and this gives them clues about the state of the other individual. Animals eliminate pheromones when urinating or by rubbing parts of the body —where their glands are located— against a surface.

The kiss: an excuse to smell each other

Living beings communicate different messages by means of smells. This doesn’t occur only in the animal kingdom. The aroma of many plants has its function in the survival of the species.

Knowing its importance, it isn’t surprising that smells are key in seeking a partner. Many animals have a special structure, called the vomeronasal organ —located between the nose and the mouth. This organ detects pheromones, and, in some cases, it can do so from many miles away.

There’s been a lot of debate about pheromones and the presence of this organ in human beings. Now we know that we can detect pheromones thanks to special receptors in our olfactory epithelium. However, the influence of pheromones on attraction and romantic relationships is still in doubt.

Some experts in psychology, such as Rafael Wlodarski from Oxford University in the U.K., support the theory that the kiss originated as a culturally acceptable way to get close enough to another person to detect their pheromones, even if it’s difficult to establish the moment when this custom started in the human history.

As we’ve seen, the kiss is an exclusive characteristic of chimpanzees, bonobos and humans. Moreover, this gesture isn’t as widespread as we thought. Less than 50% of the cultures of our species kiss with sexual intent.

There are still many secrets to unravel regarding this subject. Nevertheless, one thing is clear: animals show affection in their own way by licking, contact, visual signals and many other strategies.

Doggy Kisses – Much More than just a Lick!
Read more »
Link copied!
Interesting Articles
Wild Animals
How Do Animals Protect Themselves from the Cold?