Do Animals Have Emotions?

Emotions and feelings are inseparable psychological attributes of human beings, but do animals also have these cognitive capacities? Ethological studies give us an answer. 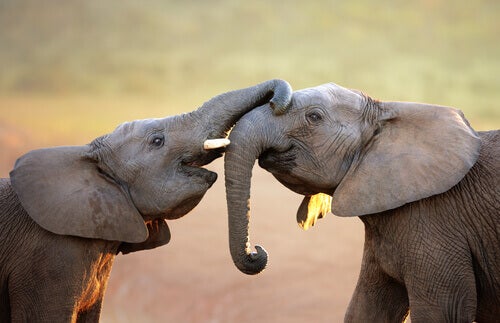 Any pet owner would happily declare that their animals have emotions. Every animal (birds and mammals, at least) has a different personality and this is endorsed by science. However, things get a little more complicated when it comes to emotions and feelings in nature. This is because these attributes are difficult to quantify though.

No matter how philosophical the subject may be, researchers all over the world seldom get tired of answering this question. Are you ready to learn more about feelings in the animal world? Continue reading then.

Feelings are both a state of mind and the conceptualized emotion that determines it. Emotions are faster, as they’re psychophysiological reactions resulting from certain stimuli when perceiving a relevant object, person, place, or event. There are more differences between both terms though:

Emotions seem to be an evolutionary mechanism, in part. This is because they can become rather useful in nature’s challenges. Some of them are basic, such as fear, anger, disgust, joy, sadness, and surprise, and have a clear innate component. The rest of the emotions are complex and can have more difficult purposes to decipher.

Do animals have feelings?

Once both terms have been elucidated, it’s more appropriate to associate the animals’ states of mind with emotions, not with feelings. Even so, these are difficult to identify because their expression is apparent in the animal’s behavior and not the emotion per se.

Even so, ethological studies have tried to demonstrate the presence of both simple and complex emotions in various animals:

Fear, a primal emotion, can explain this fact. These animals may have a more emotional reserve in the face of new stimuli after a traumatic experience.

The emotions of mammals

Things becomes even more complicated when we delve into the brain complexity of the subjects in question. This is because diverse complex emotions register in mammals. For example:

As you can see, the development of ethology in recent decades seems to indicate that humans aren’t the only ones capable of feeling in the animal world. In addition to basic emotions, these facts show that concepts such as empathy or complex emotional disorders are also present in animals.

An unresolved debate – do animals have emotions?

Despite the scientific evidence, there are detractors who disagree with the concept of emotions in the animal world. They argue that studies and interpretations are always approached from a biased anthropomorphic perspective.

Much of this debate lies in the very differentiation of complex concepts such as emotions and feelings. Can animals feel? Well, why shouldn’t they? After all, emotional biases have been observed in them. Also, are a mammal’s cognitive capacities comparable to those of humans? So many questions with many different answers that vary according to the level of understanding each one of us attributes to non-human animals.

Why Do Dogs Cry? All About Pets’ Emotions
Few things give us as much sadness like seeing our dogs cry. But sometimes they do so for no apparent reason. Your dog was so calm-- and then suddenly he begins to howl. What are the reasons why dogs cry? Read more »
Link copied!
Interesting Articles
Mental Health
Mental Stimulation in Dogs: A Matter of Games