8 Interesting Facts About the Hyacinth Macaw

The hyacinth macaw is a bird of great size and unusual intelligence. A number of special traits characterize it. 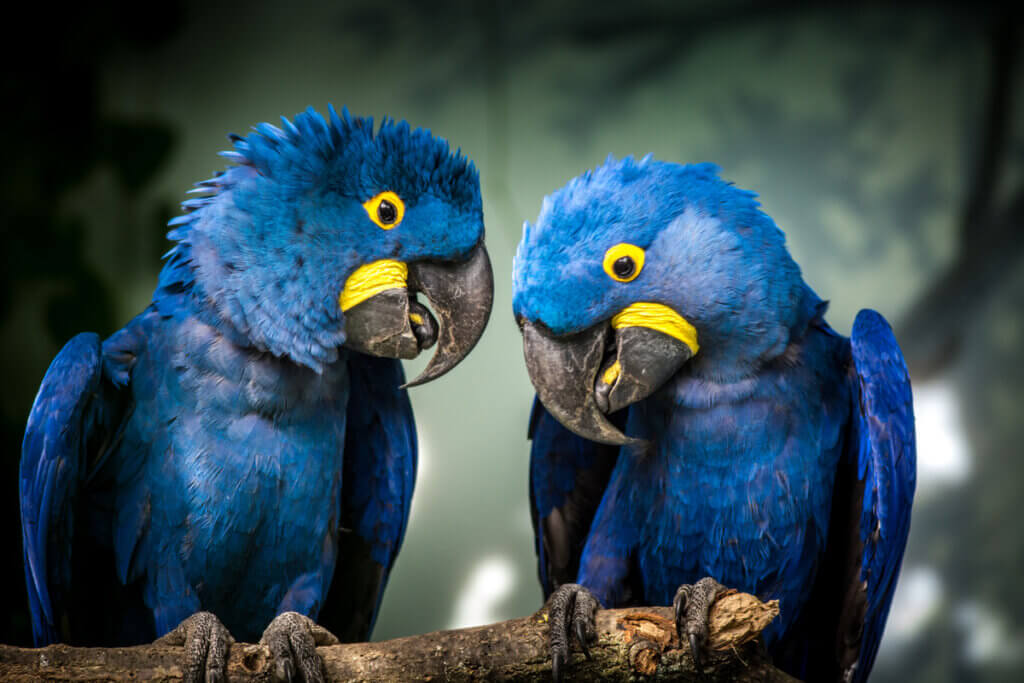 Psittacines are the most colorful and talkative birds in the animal kingdom. Macaws are one of the largest genera and, among their most curious specimens, we find the hyacinth macaw. Today, we want to share 8 interesting facts about this beautiful bird.

Unfortunately, these birds are highly sought after on the black market and many macaws end up as victims of illegal animal trafficking. Poaching has led to the endangerment of this species, according to the International Union for Conservation of Nature (IUCN). In fact, it shares this status with many other parrot species.

The hyacinth macaw and its peculiarities

The hyacinth macaw (Anodorhynchus hyacinthinus) inhabits the jungles of Brazil, Bolivia, and northern Paraguay. It’s a large parrot, as it can weigh almost 4.5 pounds as an adult.

The hyacinth macaw is cobalt in color, an intense blue, similar to indigo, while the underside of the wings and tail are grayish. Its bill is large and strong, black in color, with a bright yellow stripe at the base. What’s more, this fascinating bird also has a ring around each eye of the same bright yellow.

1. The hyacinth macaw is the largest macaw

At about 40 inches long and with a wingspan of almost 55 inches, experts consider this animal to be the largest macaw of all. Each of its wings can measure up to 16.5 inches when the bird extends them, which is a considerable figure.

2. These animals live in pairs, families, or large groups.

Hyacinth macaws are highly social animals, as they form bonds and learn within the group. Psittacines are usually gregarious birds and tend to live in large groups, based on complex interactions.

3. Can hyacinth macaws use tools?

In captivity, several hyacinth macaws have displayed the ability to manipulate tools – thin wooden sticks – to open nuts and eat their contents. However, it’s not clear whether this behavior is innate or the result of social learning.

4. It’s a vulnerable species according to IUCN

The hyacinth macaw, according to the IUCN Red List, is a vulnerable species. The current number of adult specimens is 4300 and its numbers are decreasing.

The main threat to the conservation of the species is massive illegal trade. Although numbers have decreased since the 1980s – when traffickers took at least 10,000 birds from the wild – poaching still continues.

For birds living in the Amazon, habitat loss for cattle ranching and hydropower also poses a major risk. In other regions, their habitat is also in serious danger.

5. It bears a significant resemblance to the indigo macaw

The Lear’s macaw or Indigo macaw (Anodorhynchus leari) is a macaw that’s very similar to the hyacinth, although the latter is much larger. Its habitat is restricted to northern Brazil and it’s also endangered. Currently, there are an estimated 250-1000 adult individuals in the wild according to the IUCN.

6. Do these animals eat clay?

This behavior, strange as it may seem, is typical of many groups of macaws. It’s not uncommon to see these birds moving to clay deposits and pecking at the soil. Two theories have been proposed that attempt to explain this tendency:

7. They nest in holes

Hyacinth macaws often nest in holes and hollow trees. Normally, they lay one or two eggs, although only one of them usually hatches. The chicks remain with their parents until they’re three months old.

8. Their favorite foods are found in palm trees

These birds feed on seeds, fruits such as mangoes, nuts, berries, flowers, buds, and leaves, although they have a preference for coconuts and dates. They choose palm grove areas for feeding and use jungles and forests for roosting or resting.


As you’ve probably realized by now, the hyacinth macaw is a fascinating animal with many impressive features. Unfortunately, illegal trade has depleted wild populations, bringing the species to the brink of extinction.
All About Ara Macaws
They belong to the same family as parrots and live in the rain forests of Latin America. Ara macaws are known for their brightly colored plumage. Read more »
Link copied!
Interesting Articles
Birds and Lovebirds
Characteristics of the Sparrow Family