Characteristics and Behavior of the Iberian Magpie

The Iberian magpie is peculiar due to the combination of colors in their mantle. Don't be fooled by it though, this intelligent bird can get together with others to defend themselves against predators such as raptors. This species is a scavenger who distributes food to its congeners out of mere altruism. 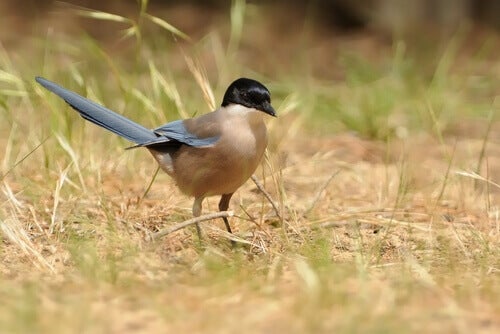 The Iberian magpie is a bird in the group of the Corvidae family and it’s quite common in the middle and south of the Iberian Peninsula. So, readers from other latitudes quite possibly haven’t heard about it.

This animal may remind you of a jay due to its characteristic bluish tones. They usually inhabit rural areas but you can spot some of them in urban areas as well. Iberian magpies tend to predominate in wilder areas.

Characteristics of the Iberian magpie

This bird is quite distinct, although similar in anatomy to the common magpie, well-known for its black “mask” over the white mantle, off-white body, and metallic blue wings. This bird is barely 14 inches long, lives in flocks, and eats a variety of plants and animals — it’s a highly adaptable animal.

This is precisely what allows them to survive and take advantage of human waste in dumps and dead animals. In fact, this bird is usually around landfills, and also around fruit monocultures in search of sweets such as figs or grapes.

The mating and reproduction of the Iberian magpie begin in April when they pair up and build a nest. They cover them with moss and reinforce them with mud and usually place them near each other. As you can see, parents seek neighbors who can help them face common threats.

This bird’s behavior is similar to that of other corvids. It’s quite sedentary and moves in busy noisy groups that are in constant communication with each other. Hundreds of these animals often gather in roosts at night.

Iberian magpies are quite aggressive towards predators, just like other birds of this group, and have no problem attacking birds of prey and other carnivores — especially during the breeding season.

The rails and other corvids act as natural alarms and this is an advantage for the rest of the animals in the forest. They usually surround the predator and shriek while they follow it, thus making any attempt at camouflage and furtiveness useless.

In addition, this kind of bird is highly intelligent, like other corvids. Bird watchers often spot them distributing food among other members of their species – even when these neighbors haven’t asked for it.

This animal inhabits the Mediterranean forests and Dehesas, especially in the southwest of the Iberian Peninsula, where it’s common to see them flying through picnic areas and woodlands.

Furthermore, these birds are unique. This is because there are only two populations in the world, divided by a few thousand miles.

You won’t find this bird outside of the Iberian territory. Thus, biologists and other professionals believe this species might have been introduced at some point and became invasive.

One of the most widespread theories is that these birds arrived from Asia in the 16th century, through exchanges with Portuguese sailors. This is because corvids have been ornamental birds for centuries as they’re so easy to train.

However, this is an old tale and Iberian magpie remains have been found in Gibraltar since. These fossilized remains are over 40,000 years old and reveal they separated from the Asian species after the last glaciations in the Eurasian territory.