Through different experiments, some researchers have found that the Eurasian Jay's habit of storing food (seeds) in cold or harsh times is due to its ability to plan for the future. 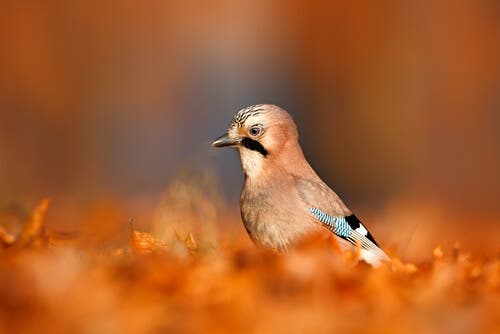 The Eurasian Jay (Garrulus Glandarius) is a very special bird that inhabits all of Europe and much of Asia. It’s a corvid bird related to crows and magpies, that’s vital for the expansion of our forests. This is thanks to one of its peculiar behavior patterns.

We can find it throughout the Spanish peninsula, although its largest populations are concentrated in the north. Its wide distribution allows us to find it in the Maghreb (Northwest Africa), Siberia, or the Himalayas.

Features and characteristics of the Eurasian Jay

This bird is easy to distinguish because, unlike the rest of the corvids, it’s very colorful. Its plumage has ochre, gray, and white tones with a particular design that is its hallmark: a black mustache on the sides of the bill and a panel of turquoise blue feathers.

This medium-sized species, smaller than a crow and a blackbird, is quite noisy and emits hoarse and rough sounds. It also emits a metallic sound that as an alert call. In addition, this bird is also able to mimic, in a sense, the sounds of other birds. Some of these sounds are similar to some raptor birds such as the Common Buzzard.

The unique behavior of the Eurasian Jay

The jay stands out for being an extremely intelligent bird, as do other species of corvids. They have very particular and interesting behaviors, and some of them make them excellent forest gardeners.

Examples include the use of gifts provided by males for females in mating rituals. This behavior is performed by a few species. In most cases, it means that the species understands the desires of other individuals, which is quite complicated.

Ornithologists have also observed that they may have complex social structures and express their moods through their vocalizations. There are hardly any records in the animal world of this behavior, although there are examples such as the chimpanzee.

This bird is also an example of intelligent animals that can use tools as the crows do. They also understand about an object’s permanence. This means that if you hide an object, such as fruit in a glass, the animal fully understands that the food hasn’t disappeared. They even use ants as a drug against parasites through “ant baths”.

Like other corvids, Eurasian Jays are specialists in surveillance and alert systems to ensure they won’t be attacked by predators. These birds quickly locate birds of prey and perform alarm vocalizations. After this, a number of them then proceed to harass the predator until it leaves the group alone.

However, their most important and interesting behavior is their ability to store seeds, especially acorns or nuts. They do this to prepare themselves for the cold season and the harsh months that await them.

Experts suspect that this behavior may be much more complicated than it seems. They proved, through different experiments, that the Eurasian Jay’s habit of keeping food is due to its ability to plan for the future, something experts thought that only humans could do.

This behavior is what makes it a very important animal for our forests. In many cases, these birds don’t consume all their stores, or they just forget about them.

Thus, the seeds germinate and the forests expand as they move these heavy nuts and seeds, which can hardly be spread otherwise.

In Portugal, this behavior is being used to reforest burned forests, and a Portuguese NGO has created deposits of native acorns in the forests so that the birds will end up forming a new forest where only ash remains.

In sum, we can definitely emulate the animal kingdom and help bring balance to nature in a natural way by imitating or supporting these birds. We hope this article has inspired you! Until next time.