Is Size the Only Difference between Partridge and Quail?

In addition to their size and appearance, the behavior and migratory habits of partridge and quail are also very different. 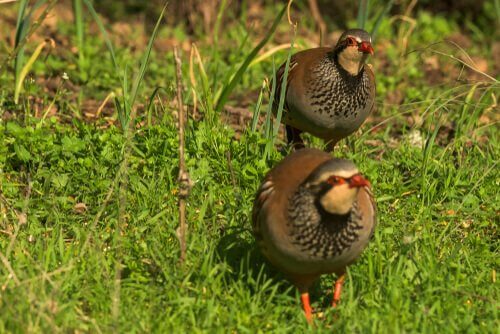 Although they may look the same to the naked eye, there are many differences between partridge and quail. These birds not only differ in their morphological aspects, but also in their behavior and habits.

In this article we’re going to tell you more about partridge and quail so that you can get to know them better and recognize their differences.

General characteristics of the partridge

The term partridge is used to refer to different species of the Phasianidae family. They are native to Asia, Africa, Europe, and the Middle East.

They are Galliformes birds that are medium-size and non-migratory, and that nest on the ground. Their diet consists of various seeds, according to the availability in their environment at that time of year.

The most common partridge

In Europe and Asia, the most common species is the Perdix perdix, or the partridge. It has also come to the United States and Canada as a hunting species.

However, in Spain, the red partridge (Alectoris rufa) is the most common, and it lives mainly in the plains and small mountains. It’s a sedentary and mostly terrestrial bird, feeding on seeds and organic matter in its environment.

However, in Latin America, some neotropical species of the Tinamidae clade and the Odontophoridae family are also commonly referred to as partridge. But these birds aren’t related to the actual partridges of the Old World. Their physical resemblance is due solely to evolutionary convergence.

Characteristics of the quail

The various species of quail are also Galliformes birds that belong to the Phasianidae family. However, they’re in another genus called Coturnix, while partridges are in the Perdix genus.

These birds have small, stubby bodies and they live all throughout Africa and Eurasia. Despite their size, quails have large, strong wings that allow them to fly long distances. This is an essential characteristic for a migratory bird like the quail, which is optimally adapted to the nomadic lifestyle.

The Cortunix coturnix, or common quail, is the most common species in Eurasia. It’s a plump bird with mostly brown plumage, with some slight black and ocher tones.

Its diet is based fundamentally on the consumption of seeds, especially wild grasses. Also, it usually consumes small insects and invertebrates to fulfill its protein needs.

Similarities and differences between partridge and quail

Now that you know a little bit more about each of these birds, it’ll be easier to distinguish between partridge and quail. However, they are also very similar birds as they’re so closely related.

Similarities between partridge and quail

Of course, we have to point out that both are Galliformes birds and belong to the same family (Phasianidae). However, their morphological, genetic and behavioral differences make them group into different genera.

Both birds are highly sought after in the international gastronomic market, mostly for their tasty and low-fat meat. Quails are usually bred in captivity for their eggs, which have low cholesterol levels.

The following saying is fitting for culinary lovers: ‘of all the birds, the partridge, and even better the quail.‘ Although the meat of both birds has outstanding nutritional properties and a pleasant, subtle taste, the quail is more prized for its delicacy, versatility, and overall good appearance.

Differences between partridge and quail

On the other hand, one of the most obvious differences between these two birds is their size. While the quail are small and stubby birds, partridges are medium size and have a stylish body.

In relation to body weight, there’s also a remarkable difference. An adult partridge can weigh about 16 oz, while quail hardly exceed 4 oz.

Another difference between partridge and quail is that the partridge is a sedentary and non-migratory bird, while the quail travel long distances. Additionally, quails have perfectly adapted themselves to the nomadic life. They usually spend their summers in Europe and will make the long trip to Africa before winter arrives.

The Lyrebird and its Amazing Abilities
Originally from Australia, the lyrebird is among the largest songbirds on earth. Reaching up to one meter long, it has an increible reportoire of sounds. Read more »
Link copied!
Interesting Articles
Birds and Lovebirds
Parrot Care in Winter

Parrots are the best-known talking birds but they're not alone. In fact, there's a large variety of birds capable of…

Summer, Christmas, Thanksgiving, New Year, weekends away... With all these holidays and vacation days, there's one question that inevitably springs…