5 Curious Facts about the Intelligence of Cats

If you've ever wondered what's going on inside a cat's head, you're not alone. Cognitive studies in animals are becoming very popular these days. 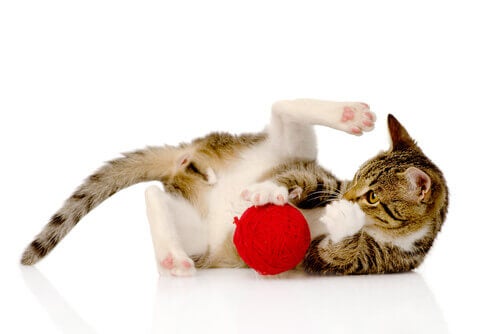 Cats are incredibly agile and skillful, being able to jump five times their height while balancing using their tails. They’re also capable of running up to 18 miles per hour! However, they do need to replenish all this energy by sleeping up to eighteen hours a day! In this article, we’ll talk about the intelligence of cats and how this makes them incredible creatures.

Most of us find a cat’s whiskers to be cute and all that, but they also have a practical function: to measure the size of a gap to determine if their body can pass through. Did you know that?

Just like humans, all the information processing that allows the cat its exquisite dexterity has to do with neural control and its ability to learn.

1. Cats have a remarkable ability to learn from experience

Intelligence is defined as the ability to learn from experience, to retain that knowledge, and use it to solve problems in a new environment. The brain is the organ that performs these functions.

In this sense, scientists have concluded that the feline brain occupies approximately 1 percent of its body mass. However, the most important thing in evaluating the intelligence of a species is the folding of the surface and the structure of the brain, not its size.

2. The structure of the feline brain and the folds on its surface is very similar to that of humans

It’s interesting to know that the cerebral cortex not only governs higher functions of rational thought but also problem-solving. This is also the storage area for short and long term memory.

In addition, memory is how the brain stores, remembers, and uses information learned from past experiences. Long-term memory reminds us of the “what,” “where,” and “when” of each specific life experience and event we have experienced in our lives.

It’s surprising to know that scientific studies have shown that cats can remember and use information from the “what” and “where” of their experiences.

Cats have approximately twice as many neurons in their cerebral cortex as dogs, which is the area of the brain responsible for information processing. This makes us wonder if the intelligence of cats is superior to a dog’s in some way.

3. It’s not your imagination: cats can keep an object in mind and look for where it might be

According to several studies, animal behavior experts believe that the intelligence of an adult cat is comparable to that of a 2-year-old human child.

In this sense, several laboratory tests have shown that cats have “object permanence” recognition. That is, they’re aware of the existence of objects that aren’t directly visible. Thus they know that if an object is out of sight, it doesn’t mean that it has disappeared forever.

4. Cats can also understand our gestures

While cats don’t understand what you’re saying with your words, they can pick up on your gestures. Researchers have found that they understand human gestures and will follow them to find food.

A 2005 study was conducted to confirm this idea:

This suggests that they have what scientists call “theory of mind”; that is, the ability to attribute knowledge, desires, and intentions to others. In this case, the cats discovered that the “pointing” scientist was trying to show them something.

Cats can count! Well, not exactly. One study consisted of researching the ability of domestic cats to distinguish between images containing two and three points for food.

The results show us that cats can train and learn to differentiate between the two different images or quantities. The authors of the research concluded that cats don’t spontaneously use numerical information. More than that, they seem to link images that vary in conjunction with quantity in order to solve the task.

All of these data demonstrate that domestic felines have some degree of understanding, assimilation, and problem-solving. That’s why it is essential to treat our pets with integrity, love, and understanding. The intelligence of cats may be high enough to even know the difference between good and bad.