Understanding a cat's way of interacting socially isn't a simple task, as many of their emotional cues are almost imperceptible to humans. 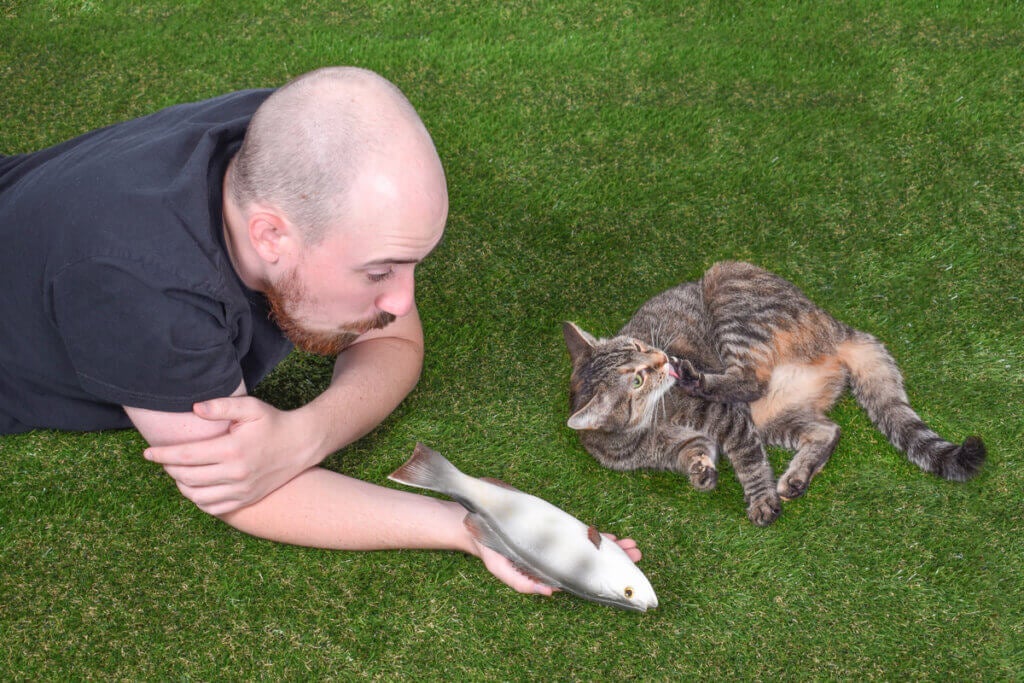 In Europe, there are more pet cats than dogs. Often, when cats and humans live together, it brings us the challenge of understanding their behavior. There’s a notion among specialists that a cat’s social interaction with humans is different from the interaction dogs have, for example.

Despite this, and according to various surveys, cat owners consider that the emotional bonds with their pets are comparable to bonds with dogs. Still, for many pet owners, elucidating feline behavior is rather challenging. And they’re not alone!

Animal behavior experts are also aware of how much we still need to learn about this topic. For this reason, if you share your life with a cat, you’ll likely be interested in reading more! These four tips could help you interpret a cat’s social interaction.

1. Cats and dogs respond similarly to some tasks

First, it’s important to recognize that there’s a difference in the domestication process and history that cats and dogs went through. It’s clear that cats weren’t selected to perform different tasks, whereas this did occur with dog domestication.

Despite this fact, the need for a fluid coexistence with humans may have been a selective pressure strong enough to influence some feline abilities. Supporting this idea, several scientific studies report similar performance both in cats and dogs when performing various tasks.

For example, a case where both species share similarity is when choosing between two objects that hide a reward by following a person’s pointing gestures. This has been observed either by pointing at the object or by the animal following the human’s gaze.

Cats and dogs have also been reported to rely on their owner’s reaction when faced with unknown objects.

Studies indicate that some of the socio-cognitive abilities of cats may be analogous to those observed in dogs.

2. A cat’s social interaction preference is with humans

In 2017, U.S. researchers conducted a study in which adult cats in two populations (Pet Cats and Shelter cats) were presented with three stimuli divided into four categories. The four categories were human social interaction, food, toys, and scents.

The report indicates that results were similar for cats living as pets and those living in shelters. Interesting, isn’t it?

3. Cats can adjust their behavior to the quality of the social interaction the person provides

We should mention that several species, including dogs, pigs, jackdaws, and several primates can perceive the degree of human attention. Thus, these animals adapt and modify their behavior in response to attentive and inattentive humans.

In 2016, experts reported that cats beg for food more intensely before attentive humans who provide visual and auditory signals. Another study noted that cats rubbed their heads and played more with attentive, interactive strangers than with passive strangers.

Recently, researchers have examined the influence of human attention (attentive or inattentive) in two groups of cats (pets versus shelter cats). The study evaluated proximity seeking and contact behavior in response to their own owners or with an unknown person.

This experiment showed that both groups of cats spent significantly more time in proximity and contact with the humans that were attentive.

Thus, these findings demonstrate that cats are sensitive to human social cues and tend to be more social with attentive human behavior. In addition, domestic cats don’t show a preference for their owners, but rather for the attention they receive.

4. A cat’s social interaction is sensitive to a human’s emotions and moods

According to several studies, a human’s mood can greatly affect a cat’s behavior. For example, cats were less likely to approach depressed owners. On the other hand, the felines were more compelled to be near cheerful and outgoing owners.

In this sense, we’ve learned that cats operate strongly by obeying their instinct. Thus, it’s possible that this reduced social interaction is due to a perceived threat in the environment. The cat may consider its owner’s state of mind as a threat or a reason to feel mistrust.

Occasionally, in everyday life, their reasons for apparent apathy may be as simple as boredom. If their owners abuse the use of candy or a certain toy, its effect may very quickly become boring.

In these circumstances, it’ll be necessary to find new stimuli to reinforce the cat’s social interaction with its owner.

Future research will improve our understanding of factors that influence a cat’s ability to detect human signals. These signals can include emotional attachments or attention states.

All of these feline senses may have made it easier for cats to obtain vital resources from humans. We’re talking about obtaining food, shelter, and social care. Undoubtedly, the development of these feline adaptations is important for the evolution of social behavior and the relationship between our species.

Advice on How to Socialize a Cat
Cats have a reputation for be ill-tempered animals. That's why a lot of people think it's difficult to socialize a cat. We'll give you some tips to help.  Read more »
Link copied!
Interesting Articles
Cats
Using Cats as Therapy for Children with Autism