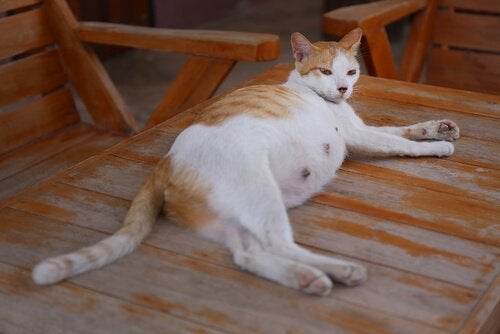 Cats and humans have similar pregnancy symptoms. These symptoms aren’t immediately apparent, but become visible at the beginning of the third or fourth week of gestation. In today’s article, we’ll be telling you all about cat gestation, including the symptoms, the changes the cat goes through, and the birth process itself.

The first change that you can observe when a cat is pregnant is in the nipples. They begin to swell and turn a darker shade of pink. Another symptom is a change in appetite and morning nausea. Normally, there are also changes in behavior,  from loving and demanding your company, to being alone and distant.

By and large, the main sign of pregnancy is an increase in the size of the abdomen, which starts to enlarge at about five weeks of gestation.

In this period of pregnancy, a balanced diet is recommended; you should include a lot of meat, fish, and eggs, with a supplement of vitamins and minerals.

We can tell that it’s almost time for a cat to give birth when we see the cat with enlarged mammary glands (breasts). Naturally, the accumulation of milk is the cause of this. Also, the genital area will become flaccid and relaxed.

The day before birth the cat will be restless, active, and will walk continually. She will also have a loss of appetite, and start to emotionally fall apart and howl. These cries become higher in tone the closer she gets to giving birth.

As she starts to give birth, the cries will become louder with each contraction, during which the first kitten will emerge. When the placenta doesn’t separate on its own, the cat will break it with her teeth.

There may be intervals between the birth of each kitten of between five minutes and one hour. Generally speaking, a cat will have between one to eight kittens. It may take a whole day for the entire litter to be born.

Generally, cats give birth with few complications and without human intervention. As soon as the little ones are born, they cozy up to their mother and begin nursing.

Can you play with your cat?

How To Tell If A Cat Is Pregnant
Nausea and mood swings may be signs that a cat is pregnant. However, you won't notice the swelling of her breasts until two weeks of pregnancy Read more »
Link copied!
Interesting Articles
Cats
A Cat's Social Interaction: 4 Interesting Facts