Hong Kong: The City in Love with Cats

Did you know that Hong Kong is the city in love with cats? They live in stores and have attracted the attention of people all over the world. 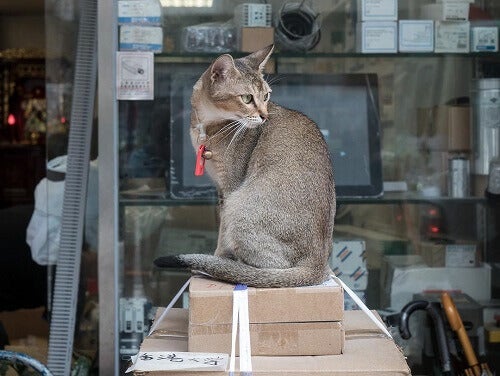 In the western world, it would probably be strange to find a pussycat in a store. However, in certain neighborhoods in Hong Kong, this seems to be the norm. A Dutch photographer was fascinated by the city in love with cats. So, he decided to make a book and create an exhibition using his photographs.

A world where cats reign

Marcel Heijnen has lived in Asia since 1992. He has taken it upon himself to use his camera to portray various aspects of a culture very different from our own.

He decided to take pictures of the traditional stores in the Sheung Wan and Sai Ying Pun areas in Hong Kong. The highlight of his pictures were the particular inhabitants of the stores…the cats.

While this may seem unthinkable for us, and also prohibited by various health regulations, it’s commonplace in those neighborhoods.

So, don’t be surprised if you enter these stores and find an adorable kitten sleeping on the shelves or grooming themselves among the different merchandise.

The best photos of the city in love with cats

In the book Hong Kong Shop Cats, Heijnen brings together his collection of cat pictures. In addition, the book shares stories about the kittens and the shops they live in.

The artist never ceases to marvel at the fact that he’s a witness to the reason that cats and humans started to coexist so many centuries ago. It was because these felines would hunt mice and keep humans company.

So, Heijnen captured the symbiotic relationship between people and cats with beautiful images that also document the particular shops in these areas of the city.

Most of the cats in the photographs live in shops in Sheung Wan and Sai Ying Pun. In fact, it’s very difficult to find a store in this area that doesn’t have a meowing friend.

In many cases, the store owners will buy the animals. But, when it comes to cats, we all know that they’re often the ones who choose a store and decide to move into it.

Also, although most kittens are likely to have lost their hunting skills, rodents keep a good distance from the stores. This could be simply because of the cat’s presence or even their smell.

A tour of traditional Hong Kong: the city in love with cats

In addition to seeing pictures of beautiful cats, Heijnen’s camera invites you to delve into the traditional family business of Hong Kong. These places are known for surviving in the retail market even with big brands and mass production.

Through his talented lens, you can immerse yourself in a chaotic, yet organized universe. In these stores, it’s almost as if time stopped before modernity arrived.

These pictures of the city in love with cats are enhanced by a local culture full of rice, dried fish, fabrics, or paper. Also, it’s full of ancestral trades.

A bit of the virtual world doesn’t hurt

However, not everything is traditional when it comes to Hong Kong and its cats. In fact, the felines here have also become famous through social networks.

One of the most famous kittens is Brother Cream. This feline became famous when he got lost and was found 26 days later thanks to the help of neighbors.

From that moment on, the cat started to gain followers on Facebook. In addition, it was part of different advertising campaigns. This helped attract more customers to its owner’s business.

4 Tips to Take Good Pictures of Your Pet
Pets are a part of our day-to-day lives. We even consider them part of the family. We'll give you some tips on how to take great pictures of your pet. Read more »
Link copied!
Interesting Articles
Cats
Feeding Your Cat: When, How, and How Much?