The animals that appear in our favorite movies and TV series have become true social media stars. Often, however, this can have a significant impact on their mental health. 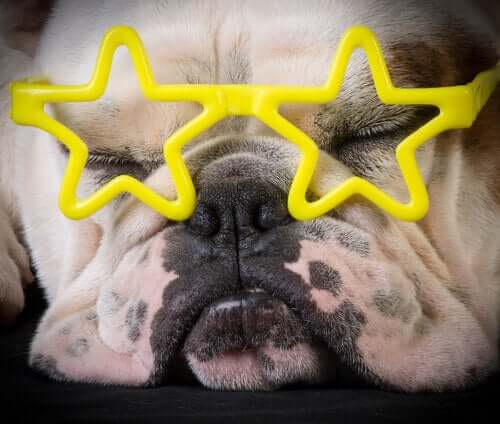 The latest trends in advertising, film and TV have turned many animals into hugely famous social media stars. Pets and wild animals alike are often at the center of ad campaigns for some of the world’s largest companies.

Similarly, photos of animals published on social media can generate a huge income for owners and businesses. At first glance, these photos seem fairly harmless. But how many animal rights do people violate in the production of this kind of online content?

Wild animals in media and entertainment

It’s becoming increasingly common to see tigers, lions, monkeys, and elephants in commercials for large companies. These species, and many others, represent positive traits that they can use to sell their products: strength, courage, energy, happiness… But what really goes on behind the scenes?

Most of these animals are removed from their natural habitat and forced to live in unsuitable environments, with small, cramped cages that don’t allow them to grow and develop properly. They have no contact with members of their own species, which severely impairs their ability to socialize.

Behind the apparent goodwill of their owners, animal social media stars often suffer years of abuse and neglect. Isolation, corporal punishment, stress, and accidental injury are all common occurrences that violate their basic rights.

Pets are also hired by major brands that transform them into social media stars. The use of animals in ad campaigns is highly profitable. Some pets even have their own managers, and can earn salaries that far exceed their owners’.

Marketing and communication specialists are highly creative people, and are always on the lookout for new ideas. This is how they manage to include animals in their ad campaigns. In fact, many have started creating commercials aimed exclusively at cats and dogs. Some of the world’s best-known pet food brands are pioneering this new technique, using ultrasonic sounds and other stimuli to get their attention.

When it comes to social media, Instagram is one of the world leaders in photo content, with millions of photos shared on the platform every day. Many animals hold the top spots for greatest numbers of followers, and their profiles help to attract new sponsors. Those responsible for managing the accounts are usually the animals’ owners, and they benefit hugely from their posts.

It wouldn’t be fair to say that all celebrity animals and social media stars are abused. But many are, even if it’s not deliberate. Charities that work to defend their rights have done extensive research into the way people treat these animals.

One of the main arguments charities put forward against the use of animals in TV commercials is the damage it can do to their mental and physical health. They have rescued many celebrity animals, finding them covered in physical wounds, and displaying deep-rooted behavioral problems.

Remember, forcing animals to act against their will and against their nature is highly detrimental to their well-being. It can have untold consequences for their mental health, especially as the animal gets older.

It should also be noted that many of the animals used in media campaigns are at risk of extinction. The increased demand promotes the illegal wildlife trade and creates a black market for the sale of rare and endangered animals. Once started, it can be very difficult to put a stop to these practices.

One example is Tiby the monkey. For years, he was kept in captivity and trained to work as an actor in film and on TV. One international hotel chain uses a cat as the mascot for its hotels. Countless dogs appear on our screens every day, used as tools to sell us all kinds of different products.

One former rescue dog named Toast has hundreds of thousands of followers on social media. She’s one of the biggest canine media stars and garners huge amounts of attention from businesses seeking to widen their brand visibility. While any consequences for her mental health are a separate issue, it’s important to consider the ethics behind these practices.