Characterized by its wrinkles, this cat will get on well with everybody in their home, regardless of their age, and even with strangers and other pets. 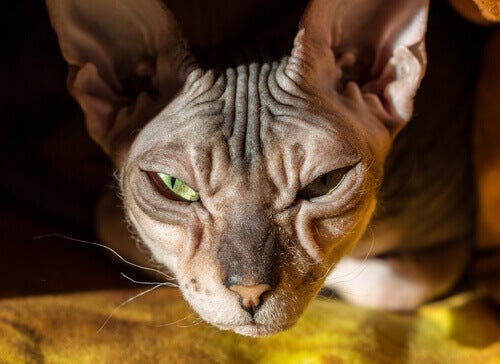 Hairless, or with an imperceptible layer of fur. A hypnotic gaze. Very clear wrinkles. Very intelligent, affectionate and playful. These are some of the characteristics of the Donskoy cat, a breed of Russian origin.

A breed of Russian origin

Originally named the Don Sphynx, the first cat with these characteristics was found in Rostov, Russia, in 1987. It was named Don after the river that runs through the city and Sphynx after the bald cat of Canadian origin.

However, it was later discovered that this breed’s lack of fur is due to the mutation of a dominant gene. In contrast, in the case of the Sphynx, it’s a recessive gene.

The breed spread throughout Russia and was later recognized by the main cat associations. The World Cat Federation (WCF) recognized it in 1997 and The International Cat Association (TICA) in 2005.

Meet the Donskoy cat, a bald, intelligent and affectionate kitty who doesn’t like to be left alone.

Physical characteristics of the Donskoy cat

While many of these beautiful cats are completely hairless, which shows off their characteristic wrinkled, suede-like skin, there are also other Donskoy variants. In all of them, the coat, either smooth or wiry, is no more than an eighth of an inch long. In many cases, the coat grows in cold weather and disappears in the warmer months.

Their skin is very elastic with marked wrinkles, especially on the cheeks, jowls and under the chin. But they’re also found at the base of the neck and tail, on the front and lower legs, down the sides of the body to the bottom and groin, and in the tummy area.

With a life expectancy of between 10 and 15 years, other physical characteristics of this beautiful feline are:

Those interested in sharing their life and home with a Donskoy cat should know that they’re very energetic and cuddly pets that love to play. For example, they like to:

This cat will get on well with all members of its human family, no matter how old they are. They even tend to accept strangers without any problem. In the same way, they have no problem sharing space and time with other pets in the home, or adapting to different situations.

Elegant, inquisitive and friendly, the Donskoy also stands out for its intelligence and balanced personality. Their meows are soft and pleasant. And, like all self-respecting cats, they’re very curious.

Of course, they don’t like to be left alone. So, if all the members of the family work, or have to be away from home for a long time, the ideal thing is to have another pet—preferably a cat—to keep them company.

Taking care of a Donskoy cat

The Donskoy cat’s skin closely resembles human skin. In addition to sweating, it tans or burns if it remains too long in the sun. Also, due to its lack of fur, this animal suffers much more from the cold. For this reason, as with all bald kittens, it’s best to keep them indoors, away from inclement weather.

In addition, due to the excess grease that comes out of their pores, they should be bathed frequently with products that are adapted to their skin. Your vet will be able to tell you which ones are the most suitable.

Also ask your vet to advise you on the right food, since they usually need more calories than other breeds to maintain optimal body temperature. And don’t forget to clean their ears to keep them free of wax.

All About the Peterbald Cat Breed
The Peterbald cat is a very sociable breed that behaves well along with other pets and children. What's more, it doesn't require regular grooming. Read more »
Link copied!
Interesting Articles
Cats
3 Benefits of Using a Cat Tracker