A recent study has confirmed that dogs are able to understand the emotions behind human facial expressions. 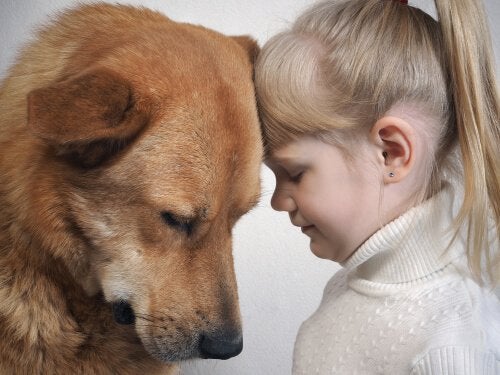 Yes, dogs do understand human facial expressions. Anyone who has had a canine companion knows that dogs are experts in reading human emotions. Most dog owners have a story to tell or remember that on some occasion their pet seemed to know that they felt sad and that they needed a good cuddle.

Humans and dogs have evolved together for many thousands of years. In a way, it makes sense that during that time we would have established some type of communication between our species. As more and more studies confirm, it seems that a large part of that common language has to do with human facial expressions. That is to say, it’s related to our ability to read emotions written on other people’s faces.

A recent study reveals just how much dogs are connected to people. The research also provides evidence that dogs use different parts of their brain to process human emotions.

The researchers explained that if a dog turns its head to the left, it could be detecting that someone is angry, afraid or happy. If there’s a look of surprise on a person’s face, dogs tend to turn their heads to the right.

A dog’s heart rate also increases when they see someone who’s having a bad day. This is according to the authors of the study, which was published in Springer’s journal Learning & Behavior in June 2018.

Dogs have lived in close contact with humans for thousands of years. As a result, dogs have learned specific skills that allow them to interact and communicate well with people. Recent studies have shown that the canine brain can pick up the emotional signals in a person’s voice, body odor, posture, as well as reading people’s faces.

In this study, the authors observed what happened when they showed dogs some photographs. These were of the same faces of two adults – a man and a woman –  with different expressions. They did this with a sample of 26 dogs while they were eating. The images were strategically placed on the edges of the animals’ line of sight. The photos showed a human face with a neutral expression or one of the six basic human emotions. Specifically, these were anger, fear, joy, sadness, surprise, and disgust.

Dogs had a stronger response and a faster heart rate when they saw photographs that showed emotional states such as anger, fear and happiness. They also took longer to go back to eating after seeing these images. The dogs’ increased heart rates suggested that they felt higher levels of stress in these cases.

In addition, the dogs tended to turn their heads to the left when they saw human faces expressing anger, fear or happiness. The opposite happened when the faces seemed surprised. This is possibly because the dogs see this as a relaxed and non-threatening expression.

These findings support the existence of an asymmetrical emotional modulation in dogs’ brains. This helps them process basic human emotions. According to the researchers, “negative emotions are clearly stimulating and seem to be processed by the right hemisphere of the dog’s brain, and most of the positive emotions on the left side.”

The results support those of other studies conducted in dogs and other mammals. These studies show that the right side of the brain plays a more important role in regulating the sympathetic outflow in our nervous system to the flow to the heart. This is an essential organ for controlling the ‘fight or flight’ behavioral response necessary for survival.

Research shows that the ability to recognize other individuals’ emotions is important. In fact, it plays a fundamental role in creating and maintaining social relationships among animals that live in groups. This ability allows them to correctly evaluate the motives and intentions of other individuals. As a result, they can adjust their behavior during social interactions.

For humans, facial expressions are an important source of information. By living in close contact with humans, dogs have developed unique socio-cognitive skills. In turn, these allow them to interact and communicate efficiently with humans, the researchers explain.

According to Scientists, Dogs Know How to Cheat
Surely, you have noticed your dog manipulating you more than once. Or if he has not done so, you think that he could. The truth is that through an experiment, scientists have now verified what you already knew: our dogs know how to cheat. Read more »
Link copied!
Interesting Articles
Dogs
Find Out Why Dogs Bury Their Food