How to Detect Canine Brain Aging

In this article, we'll tell you more about canine brain ageing and what you can do to treat it. 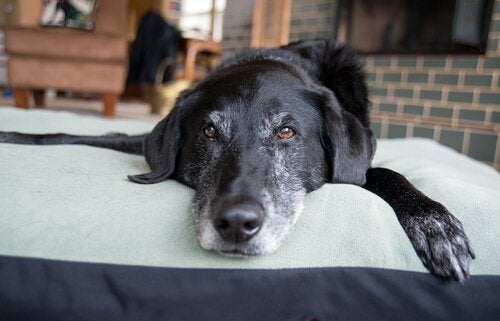 As they get older, dogs (just like humans) start to develop health problems due to their advancing years. One of these is known as canine brain aging, which causes gradual changes in the dog’s normal behavior. However, with the right diet, you can control this deterioration.

Reduced brain function causes behavioral changes in half of all dogs older than 8 years of age.

Despite this, only 12% of owners actually tell their vet about these changes. They think that these changes are completely normal because of their age, and therefore, they don’t need treatment.

But even though the signs are not easy to spot at first, they will get worse, gradually reducing your dog’s quality of life if he doesn’t get prompt treatment.

Early diagnosis of canine brain aging and giving your dog a specially designed diet to alleviate the problem will make your dog’s later years much better.

Learn how to recognize the signs of canine brain aging

One of the main things that could indicate canine brain aging is disorientation. Pay attention to your dog’s behavior and take him to the vet if you notice any of the following:

Dogs suffering from canine brain aging can often display some of the following changes in behavior:

Canine brain aging can be slowed by giving your dog a specific diet.

It consists of a combination of antioxidants and nutritional co-factors which includes:

When this diet was given to dogs suffering from canine brain aging, it was shown that after three months, 74% had fewer accidents at home. Furthermore, 61% regained their enthusiasm in greeting members of the family.

There is no doubt that early diagnosis and the right treatment will greatly improve your dog’s quality of life in those later years.

Therefore, if your dog is getting old, pay close attention to any changes in behavior. If you notice anything, go straight to your vet to see if they are related to canine brain aging.

Don’t forget, at first, the changes can be quite subtle or almost unnoticeable to a distracted owner. They will get much more noticeable as time goes by and the various symptoms will gradually get worse.

This is what makes an early diagnosis so important. So, take much care and pay close attention to your dog. He’ll be sure to repay you with lots of love.

The Importance of Sleep for Old Dogs
Older dogs require between 15 and 18 hours of sleep, so a quiet environment is key to not disturb him; a good diet and moderate exercise will help him rest Read more »
Link copied!
Interesting Articles
Mental Health
Mental Stimulation in Dogs: A Matter of Games