Today we bring you the amazing story of Kato the Hollywood dog - from stray to film star! 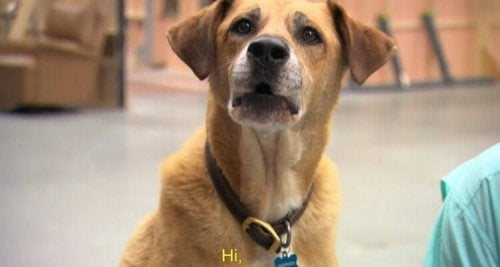 The number of dogs and other abandoned animals increases day by day. However, many have gotten their happy endings. That’s what happened for Kato, a dog with a lot of charisma that captured the right people’s hearts at the right time. Thanks to that, life “threw him a bone”. In today’s article find out more about dogs in movies!

Today we’ll tell his story, because it teaches us not to judge others by appearances, but rather by what’s on the inside. That’s what they saw in Kato, who not only had a happy ending, but you could even say it was a “movie” ending.

Kato on the streets of Mexico City, Mexico

We don’t know how Kato came to live on the streets. Perhaps he got lost, or his owner was cruel and abandoned him.

However, Scott Schweitzer and David Sousa were nearby shooting a film. Kato barged in without permission, but proved his talent. That talent didn’t go unnoticed by the artists, who quickly did the necessary paperwork to take him to Hollywood.

After a bath, a haircut, a veterinary visit and a little rest, Kato looked wonderful. He was a beautiful dog with a celebrity look.

Although Kato was friendly, no one could deny that he was a stray dog. No one knew how long he had been on the streets. Therefore, to achieve good social skills and to help him obey orders and be able to be an actor, he needed thorough training.

The special training used positive reinforcement, which has been proven to work wonders. Kato was already ready for stardom. And, his new owners had already chosen his first role: Big Jim’s companion in Under the Dome.

This science fiction TV series is based on Stephen King’s novel of the same name. It’s about people in a small town far away from the outside world, when, suddenly, a dome falls from somewhere in space and begins to change their lives.

Kato is the faithful, loyal companion of one of the main characters, and gets involved in a series of adventures with him.

You can see Kato in the series being a perfect actor! He knows when to sit still or lie down, when he should walk or run, when he should look at the actors or look the other way, and when to be bark or to be quiet. Will the next Oscar be for him? Who knows…

Other dogs in movies

Although not all dogs in movies are abandoned and rescued like Kato. We’ll remind you of some of them here:

Lassie: A TV series from another generation that you’ll probably remember. Lassie was a beautiful collie who has filled our minds with wonderful memories. If you have children, make sure they know about this beloved story.

Hachi: Based on the story of a dog who waited for his master for years in a train station. It was a sad story, but full of beautiful values.

Marley: The unruly dog who shared the screen with Jennifer Aniston and really made us laugh.

Beethoven: Having a St. Bernard in a small house that’s also full of children is a real adventure. Watch this movie again and have a good laugh!

These are just a few of the many famous dogs in movies, but we’re sure you can think of many others. Why not share them with us?