Panda Dogs: Everything You've Ever Wanted to Know

Ever heard of panda dogs? We'll tell you all about this new craze that started in China and is taking the dog world by storm! 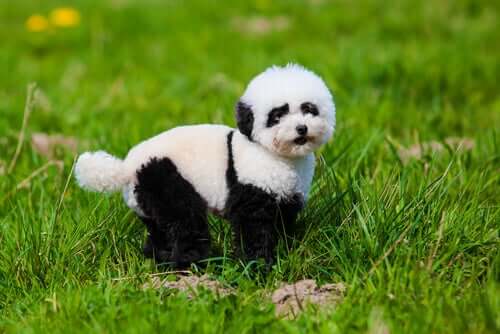 Panda dogs, a new breed or an art trend? Let’s take a closer look at this new craze from China. Apparently, the dogs became extremely popular after being featured in pet cafes and are now the faithful companion everyone wants.

The origin of Panda dogs

Panda dogs, also known as pandogs, were created by Hsin Ch’en, a Chinese animal store owner. He’s famous for creating “new breeds” of dogs that resemble other animals. However, he doesn’t create these new breeds by actually breeding the dogs to achieve the perfect look. Instead, he takes advantage of certain aspects of existing breeds and applies new techniques to transform their appearance.

Accordingly, panda dogs are actually just normal, white Chow Chow dogs. Then, Ch’en dyes the animals to make them resemble pandas. However, Ch’en states that these techniques are not harmful to the dogs’ health.

As you can see, the dogs look just like pandas. They have the distinctive black and white coat, as well as black around their eyes and ears.

The trend has become very popular in China. Hsin Ch’en’s store, located in Chengdu, is no longer able to keep up with the demand for these dogs. Perhaps there’s a simple reason why the dogs have become so popular. Culturally in China, the panda is a beloved animal. Since ancient times, Chinese people have regarded pandas as a sacred and admired animal.

However, Hsin Ch’en’s store isn’t the only place that sells these dogs. In fact, the dogs are already available in other stores in China and all over the world. The technique has spread to other dog sellers in order to address the great demand for panda dogs on the market.

In the rest of the world

The fashion trend of the pandog has extended to other countries in the world as well. It seems like everyone wants to buy these little bears because of how cute they are – and for the novelty of having a dog that looks just like an adorable panda!

The resemblance to pandas is so uncanny that the Orfei circus in Italy was actually closed after a complaint that they were deceiving their spectators. Instead of using real pandas, the circus was actually using panda dogs!

The animal protection community ultimately dropped any complaints against the circus, since the only damage that the circus caused to the dogs was due to exposure to bright lights.

However, even though the chemicals people use to dye panda dogs’ fur is not harmful, the animal protection community remains vigilant. There have been several complaints concerning the aesthetic changes to the dogs.

The beauty of the panda dog doesn’t come cheap. Firstly, it’s costly to purchase one of the animals since the cosmetic technique is difficult and time-consuming. Second, once you own the dog, the dye job requires maintenance or the dog will lose its coloring.

Owners should repeat the dyeing process approximately every six months for the rest of the dog’s life. One of the criticisms of this process is that we don’t yet know the effects of this technique long term.

One curious fact about Chow Chow dogs is that apparently the dog was once bred for human consumption in ancient China. Now, it’s one of the most popular pets in the world!

In fact, the animal was such a common ingredient in culinary dishes that the name “Chow” means “food” in slang Chinese.

Panda dogs are certainly interesting to look at because of their modified appearance. However, exposing dogs to this type of beauty procedure certainly doesn’t seem to be the most ethical choice.

Panda Chow Chow: Is it a Dog or a Panda?
This is an incredible animal and, at first glance, you'd swear he was a panda. Today, we'll go into detail about the panda chow chow dog breed.  Read more »
Link copied!
Interesting Articles
Dogs
7 Causes of Suffocation in Dogs