The Giant Panda: A Symbol of Culture and Tradition

The giant panda is one of the most famous animals in the world. In this article, we'll be taking a closer look at their cultural significance in their native country of China. 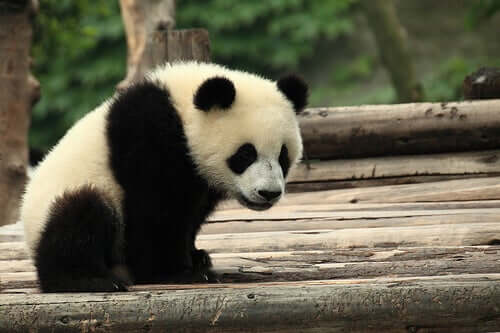 Pandas are adorable animals that never fail to bring a smile to our faces. More than that, however, they also represent an important symbol in China. They form part of their culture, history and tradition, and hold a special place in people’s hearts. Today, we want to tell you what makes the giant panda so special.

The symbolic meaning of the giant panda

In the Chinese language, the panda’s name translates to “bear-cat”. With the strength of a bear, the gentleness of a cat, and those characteristic black spots on their faces, these wonderful creatures simply melt our hearts.

The panda symbolizes fragility, extinction, family ruptures, breaking with the past, and lateral thinking, among many other things. In fact, everything about this animal takes on a symbolic meaning within Chinese culture and tradition.

For example, their black and white fur is said to represent yin and yang, and the importance of balance between energies. Despite their seemingly sweet and gentle nature, they’re also incredibly strong, and have come to be seen as a symbol of strength. The gift of a panda – whether it be a figurine or a necklace – is said to bring balance to your life.

China is known for using pandas in its diplomatic relations with other countries, and often gives pandas as gifts to places they visit. In doing so, they show that China is a country that is open to other cultures, and interested in maintaining good relationships with other nations.

Despite their laid-back exterior, pandas are expert tree-climbers, and highly intelligent animals, often serving as a symbol of great knowledge. A panda amulet is said to have the power to boost your intelligence and nourish your soul.

No matter what they do and no matter how old they get, giant pandas retain their sweet and gentle appearance. As a result, they’re a symbol of eternal youth, something which people all over the world have sought for millennia.

Having an amulet, figurine, pendant or any other object inspired by the giant panda will act as a source of good fortune both in life and in work (including the mind, the soul and even your health).

Needless to say, a lot of people will be skeptical of the symbolic power of pandas. But hey, it doesn’t hurt to give it a shot, right? China is one of the healthiest places in the world, and one of the countries where life expectancy is highest. Who knows, maybe pandas have something to do with it…

Interesting facts about the giant panda

Besides their cultural significance, these animals are widely considered one of the most adorable and charming creatures on the planet. In this final section, we want to tell you about some of the characteristics that make pandas so special.

Have you enjoyed learning more about these fascinating bears? The natural world never fails to surprise us, and there’s always something new to learn about the animal kingdom.

5 Animals from China
Animals from China have adapted to geographical characteristics, in a surprising way. Find out how in this article about Chinese animals. Read more »
Link copied!
Interesting Articles
Wild Animals
5 Animals that Live in Grasslands