The History of the Relationship Between Humans and Dogs

Canines are the descendents of wolves, but when humans became aware of their qualities, we decided to keep them nearby and offer them a domestic life. The strong relationship between humans and dogs is undeniable, and our pets are always there when we need them. Without a doubt, dogs truly are man's best friend. 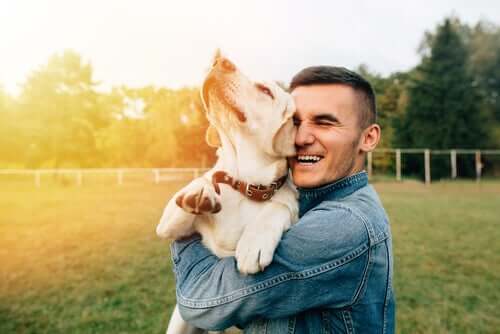 As the old saying goes, dogs are man’s best friend. And if the saying has stuck around for such a long time, then there must be some truth behind it. We all know that dogs are the greatest man’s companions in all of the animal kingdom. But, do you know the history of the strong relationship between humans and dogs?

The relationship between humans and dogs: The origin of canines

There are all sorts of theories that attempt to explain the origin of dogs. The theory that most scientists accept today explains that dogs evolved from wolves, thanks to human settlements. When humans became sedentary and created their first villages, they began to produce garbage heaps.

These garbage heaps consisted mostly of leftover food, which attracted wolves. Those wolves that were less afraid of humans managed to eat more than more fearful animals because they didn’t run away when humans approached.

At the same time, humans soon realized that having these animals nearby was an advantage. The wolves warned the settlers when danger was approaching their villages and, what’s more, these animals knew how to hunt. So, humans would keep them near their homes, and they began to reproduce.

It didn’t take long for genetic changes to begin to appear. Each generation of puppies was less aggressive and fearful, and more and more docile. What’s more, they were being raised by human beings. Very soon, they stopped being wolves and became the first primitive dogs.

As you can conclude, dogs wouldn’t exist if it weren’t for human beings. Their evolution has depended solely on humans. What’s more, we have continued to genetically select breeds in order to maximize their potential.

The relationship between humans and dogs: How they help us

The history of humanity would be very different if dogs had never come into existence. After all, they’ve been accompanying us since our very first settlements. When the first domestic canines came to live among humans, we started reproducing them, selecting their most desirable characteristics in order to adapt them to our needs.

Without hunting dogs, the diet and survival of human beings would have been very different. The same occurs with guard dogs. These animals protected villages and their inhabitants, both from wild animals as well as other hostile neighbors. And they did so in exchange for a bowl of food.

As our needs have evolved, our faithful companions evolved along with us. We all know that the great kings and military leaders of history always had companion dogs. Of course, these animals weren’t responsible for dictating any laws. But there were always close to the leaders who needed wisdom, comfort, and support in order to guide their countries.

A 2015 study from a Japanese university confirms what pet owners have long suspected. According to the study, looking at or interacting with a dog increases the levels of oxytocin in the brain. Oxytocin is also known as the love hormone because it produces a sense of calm and happiness.

In other words, when it comes to brain chemistry, the fact that we love dogs has to do with genetics. Oxytocin is the same hormone that bonds mothers and children, families, and partners. And if we interact with dogs and they return our affection, then we create emotional bonds that we can even measure scientifically.

Human beings have evolved since those first primitive settlements, and we’ve come to love our canine companions. This is a condition we can’t escape. At the same time, their good nature and behavior make them impossible not to love.

Because when a dog looks at its human family, something happens that’s similar to what occurs in humans. Dogs release hormones that give them a sense of well-being and happiness. Both dogs and human beings share thousands of years of history and we’ve evolved to be together.

The wonderful nature of dogs

Since the times of the first wolves that were unafraid of humans and stayed by our side, these animals have changed quite a bit, and not only physically. Dogs have a unique nature within the animal kingdom. They are docile, complacent and, above all, they have a desire to be around humans.

One of the characteristics that stand out most in canines is their nature. The greatest reward you can give a dog is the attention and approval of humans. And dogs are willing to do whatever it takes to earn this reward. No other living creature has enough fortitude to adapt to our societies and way of life. However, dogs are willing to do all of that and more in exchange for being by our side.

Wearing a leash on the street and waiting to go to the bathroom until the times their owners have established… These are just two of the sacrifices they make to coexist with humans. In extreme cases, we know of dogs that have risked and lost their lives to protect their human families. Apparently, there’s nothing they won’t do in order to show their love for us.

The relationship between humans and dogs: How dogs work for us

In fact, the nature of dogs is so amazing that we’ve designed professions that only they can carry out. Given the right training, dogs can dedicate their entire lives to working for humans. And they do so not only in exchange for food and affection, but also for the simple satisfaction of doing their job well.

Only therapy dogs can offer the comfort that trainers teach them to give in order to visit hospitals or courthouses. In the same way, guide dogs provide unparalleled service for people with visual impairments. Humans are constantly discovering new ways in which animals can serve humans, from controlling diabetes to accompanying individuals with autism.

When it comes to police work, dogs perform some of the most delicate tasks. This doesn’t just include detecting drugs and other substances with their tremendous sense of smell. They also locate lost people and assist in their recovery. And we can’t forget about those animals that search for humans that have become trapped in the debris left behind by natural disasters.

Beyond a shadow of a doubt, dogs are man’s best friend. The history of the relationship between humans and dogs share goes back for thousands of years. And both of us have evolved in order to adapt to one another. While we provide food, comfort, and security, they dedicate their lives to making us happy.

“Histories are more full of examples of the fidelity of dogs than of friends.”

Taxonomy Of Dogs: How similar are dogs to wolves?
Dogs have been part of our lives either as pets, guardians, or working dogs for a long time. Would like you like to know more about the taxonomy of dogs? Read more »
Link copied!
Interesting Articles
Dogs
The Dogs that Protect Wild Animals