Why Do Dogs Love to Roll Around in the Grass?

Have you ever asked yourself why dogs love to roll around in the grass? Actually, there is a wide variety of reasons. Continue reading in order to discover a bit more about this quirky behavior. 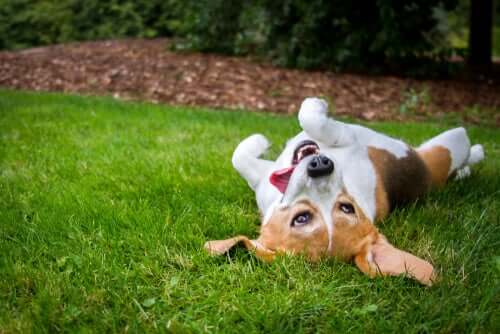 Carers and experts on animal behavior have suggested that this habit may have to do with hereditary factors. According to researchers from Wolf Park in Battle Ground, Indiana, wolves tend to roll around in the scents that interest them.

Upon their return, they are greeted by their pack and, during this greeting, the fellow wolves investigate their scent thoroughly. But besides your pup’s genetics, there are a great many other reasons to explain why he or she loves the grass so much. In the article below, we’ll go into detail regarding some of the most common reasons why domestic dogs roll around in the grass.

The truth is that rolling around in the grass is likely to serve a number of purposes. For example, it’s quite possible that it’s a way for dogs to get rid of any uncomfortable dust and grime that causing an itch. Dirt, pine sap, bird excrement, bits of leaves, and other substances can adhere to a dog’s back and be quite bothersome.

The need for your dog to roll around in the grass can also be an indication of some health issue that’s causing an itch. This can include problems like skin allergies, flea bites, or a tick. If you think this may be the case, then take your dog to see a vet in order to identify the underlying cause. What’s more, we suggest you apply a preventative treatment against ticks and fleas.

A means for spreading scents

Another reason for your dog’s outdoor behavior may be that he or she has identified a specific scent in a certain patch of grass. Some predators like to surround themselves with certain scents, and don’t forget that dogs are predators by nature.

The speculation behind this particular behavior claims that the new scent helps predators to disguise their scent from their prey. For example, a wolf or coyote may roll around in a patch of grass where a rabbit has recently been.

This way, the predator will cover itself up in the smell of its prey. Researchers believe that this may allow wolves and coyotes to get closer to their prey and guarantee a more successful hunt.

The superior sense of smell in dogs

Dogs have more than 220 million scent receptors in their nose, while humans have only 5 million of these receptors. This information comes from Dr. Julio Correa, associate professor of Food and Animal Sciences at the University of Alabama.

A comparative review of the olfactory abilities of humans and animals supports the idea that some mammals, such as rats and dogs, are more sensitive to odorants than humans. What’s more, they appear to be better at differentiating between different concentrations of an odorant.

Reports in which the same researchers compared dogs and humans support the notion that sensitivity to smells is greater in dogs than in humans. In 1984, Krestel et al., for example, reported that dogs (beagles) are approximately 300 times more sensitive to some specific odors than humans.

Rolling around in the grass: Relaxation or dermatological irritation?

Finally, your dog may like to roll in the grass simply because it feels good. What could be better than finding a soft spot of grass to stretch out on, while scratching your back and taking in the warm sun?

Consider how relaxed or intense canine behavior is when rolling in the grass. A slow and relaxed twist from side to side with their legs raised in the air can be an indication of their emotional health and mental state.

The energy or strength with which they rub their face, neck or back may indicate that dogs are cleaning their fur or reacting to a particular scent. However, if your dog’s behavior is very intense, repetitive, or lasts a long time, then you should consult your veterinarian. This behavior may be a sign that something is irritating your dog, such as an underlying dermatological condition.

Why Do Dogs Eat Grass?
Have you ever asked yourself why dogs eat grass? There are several reasons behind this canine behavior, and we tell you all about it in this article.  Read more »
Link copied!
Interesting Articles
Dogs
7 Causes of Suffocation in Dogs