Why Do Giant Dog Breeds Have a Shorter Life Span?

Have you ever wondered why larger dogs live shorter lives? Today we'll talk about the chromosomal factors that lead to a short life span in giant dog breeds. 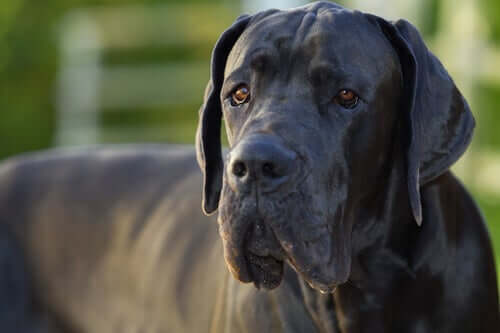 Recent studies reveal the reason behind the short life span of giant dogs. According to these studies, the shorter life span of larger dogs has to do with more accelerated aging in comparison to fellow canines.

The categorization of a breed as giant involves a combination of height and volume. There are a few exceptions, however, such as the Irish Wolfhound, which is on the thinner side. All of these dogs share the common characteristic of weighing more than 90kg. What’s more, they all have a life expectancy of 7 or 8 years.

If you were to observe the duration of the life cycles of mammals, you may think that giant dogs would live longer. For example, while the longevity of whales and elephants can be over a century, rats hardly reach 2 years of age.

However, if the analysis focuses on one specific animal species, then the tendency is just the opposite. The smallest members of a given mammal species enjoy the longest life expectancy.

Medium-sized dog breeds have an average life expectancy of 13 years. Based on this fact, investigators at the University of Göttingen in Germany set out to explain why mastiffs and Great Danes have such a short life span.

To do so, they analyzed data they received from veterinarian hospitals, thus evaluating more than 56,000 dogs from 74 different breeds. Their conclusions, which they published in the scientific journal American Naturalist, revolved around accelerated aging.

In other words, when a large dog dies at the age of only 7, it’s not because that dog has died young. Rather, it’s because the animal has already reached old age.

Just the same, when it comes to interpreting the German research, we can observe that the foundation for the data is observational analysis. However, it fails to explain the physiological reason for this accelerated aging. Research led by the University of Science and Technology of Trondheim, Norway, sought to discover an explanation.

Biologist Thor Harald Ringsby directed the Norwegian team, which published its results in the scientific journal Proceedings of the Royal Society. They focused on the genetic factor, on a chromosomal level.

Specifically, the investigators analyzed the longevity of the telomeres of giant dogs. These telomeres are the most distal portion of chromosomes and have the particularity of shrinking with time during cellular divisions. Research has shown that the size of these regions is very small in the case of old age and in illnesses such as cancer.

This study concluded that there are 2 main factors that contribute to rapid cell division in giant dogs. The first is their metabolism. The second is the great amount of energy that giant dogs need in order to grow. And, with this rapid cellular division comes the corresponding telomeric deterioration.

Therefore, the first indication of aging in giant dogs occurs at a cellular level. This occurs because when the telomeres reach a critical size, this alters a cell’s ability to divide. What’s more, cells may even die off.

This genetic deterioration is determined in a natural way and there’s still no way to alter it. Just the same, owners can still influence the life span of giant dogs by practicing habits that encourage healthy living. This includes proper nutrition, affection, and the right amount of exercise. Keeping your dog as healthy and happy as possible will improve the quality of life as well as life expectancy.

Animals With The Shortest Lifespan
Insects are the species that live for the least amount of time, some of them only last a few minutes. However, some mammals can live for decades, with exceptions like mice that don't even make it five years Read more »
Link copied!
Interesting Articles
Dogs
7 Causes of Suffocation in Dogs