Today, we'll tell you about 4 species of rodents that make good pets. These small animals are more affordable both in terms of maintenance costs and in the time that must be devoted to caring for them. 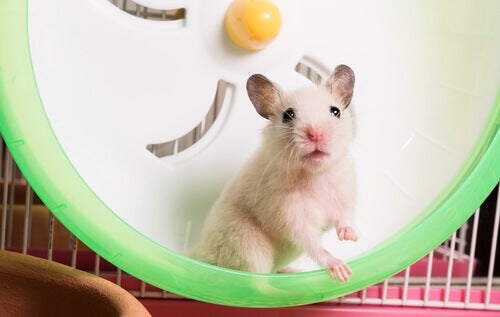 Rodents are small, friendly and very expressive mammals and, at the same time, they’re very intelligent. They’ve become popular in recent decades because they’re easy to care for and clean and don’t take up much space in your home. With that in mind, we want to tell you about 4 rodent species that make good pets.

Rodents are a class of mammals that are characterized by their teeth. They have four large incisors, two in the upper jaw and two in the lower jaw, which never stop growing. Therefore, they need to be gnawing continuously, to wear them down and stay healthy.

There are rodents of many different sizes. The smallest in the world are the pygmy gerbils, which weigh only 3 grams. The largest, on the other hand, is the capybara: They can weigh up to 77 pounds and be more or less the same size as a German Shepherd dog.

Rodents that make good pets don’t reach these extremes. Rather, these two examples are wild animals that are very difficult to look after in captivity. In veterinary practices, domestic rodents are treated as exotic animals, but are adapted to live in our homes.

These animals are herbivores, that is, they only feed on fruits and vegetables. In some cases, like hamsters or gerbils, they can also consume seeds and nuts. Their food must always be fresh, washed, and raw; they can’t consume oil, salt, sugar, or other additives.

If you want to have with one of these rodents that can be pets, first find out how to prepare yourself to welcome one into your home. For example, what food needs, which cage is the most suitable, and which toys it can enjoy.

The hamster, which appears in this article’s cover photo, is the most well-known among those rodents that make good pets. There are different species of hamsters, which vary in size and color, but there are several general characteristics that these species share:

They’re nocturnal animals, meaning that their most active hours take place during the night. If you play with them during the day, they’ll probably be in a bad mood. What’s more, at night, they’ll gnaw, run on their wheel, and make noise. Even though they’re so small, they have a lot of energy to spend and they use it to run on their wheel.

Except for one particular species, they’re very territorial animals and don’t like to share their cage with other hamsters. They prefer to live alone–otherwise, they’ll fight and hurt each other very much.

Unlike hamsters, guinea pigs are gregarious animals that, with few exceptions, love to have the company of their peers. They don’t usually have territorial behaviors and are capable of even sharing food.

Guinea pigs can weigh between two and six and a half pounds, depending on their breed, and have different types of hair. The differences between them are minimal. Guinea pigs love to eat and are very sleepy; unlike hamsters, they’re more active during the day and at and twilight.

Guinea pigs are very expressive animals and have a great repertoire of sounds they can make. They’re also very intelligent and manage to create very significant bonds with people and other animals they love with.

Gerbils are similar in size to hamsters, but have a few differences that allow us to identify them. The most striking are their large, strong hind legs, which help them jump and run. If you set up a terrarium for them as a cage, you must bear in mind that they could jump and run away.


In addition, gerbils enjoy digging and sleeping in burrows. You must keep this in mind when preparing their cage, meaning you need to satisfy their instinct to dig and make tunnels to take refuge in.

Perhaps, out of all the rodent species that make good pets, this is the least known on this list. Chinchillas are similar in size to guinea pigs, but weigh less. Females, which are larger than males, reach 1.75 ounces.


There’s only one domestic species of chinchilla – the result of careful genetic selection over generations. Chinchillas living in the wild can’t survive in captivity and won’t be happy as pets.

Chinchillas are characterized by their large round ears and short hairy tail, unique in rodents that make good pets. They’re extremely social animals with people they know, but are shy and afraid of strangers. In spite of this, petting and handling overwhelm them and cause them stress.

Rodents are excellent pets if we respect their instincts and provide them with food or objects they can gnaw on. Each species is unique and has its own characteristics. So, if you want to adopt a rodent, first find out more about them so that you’re both happy from day one.

5 Largest Rodents of the Animal Kingdom
When you think about the rodent family, you probably imagine very small animals. Today, you'll discover the largest rodents in the world. Read more »
Link copied!
Interesting Articles
Hamsters and Rodents
Causes, Symptoms and Treatments of Tumors in Hamsters