What Causes Stress in Hamsters?

Running around the cage, having its ears turned backwards or forward, or exposing its belly while showing its teeth, are clear signs of your pet's stress. 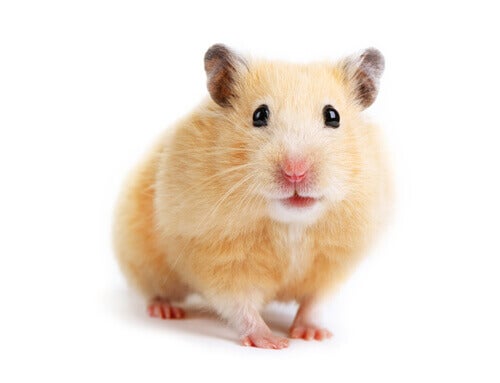 Most of the time we see hamsters having fun in their little cages, however, this may be a sign of stress in hamsters. They’ll often run quickly around their cage, groom themselves often or even start poking around in their food. Do these actions disguise something else that we can’t see?

Hamsters are extremely complex animals. However, if we understand the reason for their unpredictable actions, we can keep them healthy and happy. Stress in hamsters is a problem for our pet, so we must know and apply methods to reduce it, thus helping it live for a long time.

How do we know that our hamster is restless?

There are certain behavior patterns that show that your hamster is nervous. One of them could be seeing your pet start to walk strangely as if it was crawling around in its cage. The important thing here is to know what’s causing such nervousness.

The causes of stress in hamsters commonly arise from external factors: a cat for example. We have to look very carefully at those potential dangers that the hamster can detect. Even our constant interaction and harassment can be reason enough for its nervousness.

Now, if your hamster gets alarmed, it’ll tell you, it’ll blow up its cheeks and pull its ears forward. When it uses these mechanisms, it means it’s ready to run away quickly.

If your hamster has its ears backwards, don’t try for any reason to bring your hand close to it. It’ll surely bite you, its ears are key to knowing when it’s aggressive and when it’s scared.

One of the hamster’s most contradictory signals is the typical pose in which it turns around to expose its belly while showing its little teeth. Why is this contradictory? Well, because it leads us to think that it’s a position of surrender and obedience, yet it’s one way of telling you that it’s very aggressive.

There’s a condition called “cage rage”, which is a psychological disorder that any animal living in a cage can suffer. It can vary in severity from being quite mild to very severe, causing disturbing and dangerous behavior for people, other hamsters, and for the animal itself.

The cause resides in the fact that the animal is kept in a cage that is too small for it. Syrian hamsters, in particular, are at very high risk, as many people keep them in environments unsuitable for living. Syrian hamsters can grow quite large and require a lot of space, therefore, “cage rage” can be mistaken for natural aggression.

This type of disorder can be stressful to the animal, and can even make it difficult for us to feed, handle or clean it. Many hamsters with this condition won’t allow their cage doors to be opened. Hamster stress can shorten their lives as well as increase the risk of developing health problems over time.

How to avoid stress in hamsters?

Some of the most common causes of stress in hamsters include abrupt changes in habitat, poor diet and hygiene, noise pollution and poor exercise.

To avoid stress in hamsters, it’s sufficient to follow a series of guidelines and methods starting at the time of the adoption. Here are some:

Do Hamsters Hibernate?
Do hamsters hibernate? If the environmental conditions aren't favorable, they do! With a good temperature and enough food you can avoid it in your pet. Read more »
Link copied!
Interesting Articles
Hamsters and Rodents
Why Do Guinea Pigs Squeal? Find Out Now!