Can You Have Multiple Russian Tortoises?

Although it's possible, this species of chelonian can be particularly territorial or aggressive, especially with other members of their species. They may even attack their owners. 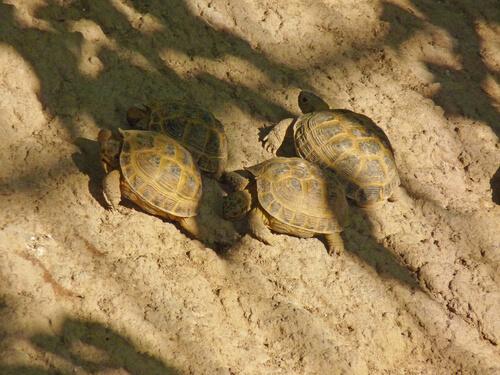 Chelonians are popular pets, but most people don’t know very much about their behavior and how to take care of them. For example, keeping multiple Russian Tortoises or having other land-bound animals with them might not be the best idea because they could have conflicts between them.

In today’s article, you can read about the Russian Tortoises. Also, you can apply the same basic ideas that are in this article to other land-bound tortoises, especially the Greek tortoise.

Some information about the Russian tortoise

The Russian tortoise, also known as the Afghan tortoise (Agrionemys horsfieldii) is one of the most common species of pet tortoise. This is probably because they exist all over Eurasia. Like other chelonians, there are some differences between males and females. For example, males are generally smaller.

Can you get Russian Tortoises to reproduce in the same terrarium?

Like other chelonians, Russian Tortoises are ectothermic and need sunlight to get their body moving. So, access to sunlight and the conditions of their environment are important when it comes to diagnosing behavioral problems in this species and other reptiles.

Terrarium conditions also play a role in reproduction, because they will begin to mate after they hibernate. Males are very pushy because this species of tortoise can be very aggressive during mating season.

Like other terrestrial tortoises, Russian Tortoises are solitary. Of course, they interact with other tortoises to mate, but keeping multiple Russian Tortoises can lead to problems. They’ll probably be territorial (in general, not because of mating), especially if they’re in a small terrarium.

Tortoises in the Testudo genus are especially known for being territorial. Even with only one, it might attack objects or even their owners if they are improperly handled.

Exotic animals aren’t easy to have as pets, so it would be best to start with simpler species. Tortoises aren’t generally one of them. If you want to keep a species like this as a pet, it’s best to have a wide, outdoor area. That’s even more valid if you want to have multiple tortoises.

If you have an indoor terrarium, you should only have one. If you want to keep multiple Russian Tortoises, then read the following tips. First, don’t keep just one male and one female. If you want male tortoises, they need to live with at least three females in a terrarium that’s several feet long, and with outside access.

An important part of maintaining order is to buy a terrarium that allows you to create barriers. This way you can limit the tortoises physical and visual contact.

Aggressive, pushy behavior in mating season is normal, but wild females might try to get away from the males. So, another option, if you want multiple Russian Tortoises, is to have more than one terrarium and only put the tortoises together every so often.

These kinds of problems make it clear why it’s harder to keep exotic animals as pets. It’s also a good reminder of how important vets and other professionals are when it comes to being a responsible owner.

Don’t forget that even though there are still plenty of tortoises out there, the Russian Tortoise population has dropped due to illegal trafficking. If things keep going down the way they are, they might become an endangered species.

Tortoises and Reptiles
Turtles as a Cultural Symbol

Turtles represent sluggishness to some people and wisdom for others. However, other people consider turtles as a symbol of longevity. In different cultures, this reptile and their famous shells represent…