Keeping an Iguana as a Pet

Iguanas can make great pets, but it's obviously nothing like having a dog. In this article, we'll tell you all the important things you need to know before you decide to adopt an iguana. 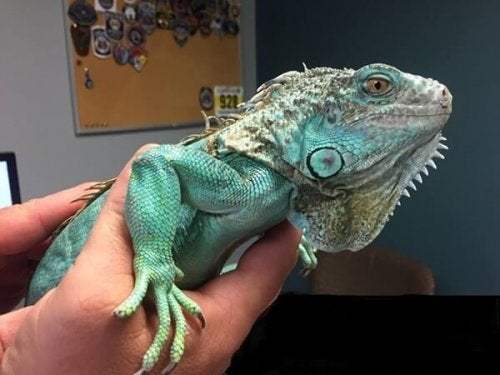 A few years ago, it became fashionable to have an exotic animal as a pet. One such animal is the iguana, a quiet animal, suitable for the home. Want to know more? Perhaps you want to find out about their behavior or how to care for one? In this article, we’ll tell you all about keeping an iguana as a pet!

What is an iguana?

The iguana is a reptile and looks like a small lizard with a big tail and sharp spikes. It uses its tail as a defense mechanism. Although they’re normally quite peaceful animals, they can get angry easily, so be careful!

They come from the same animal family as lizards and crocodiles, which are cold-blooded animals. If they’re not happy about something, they will attack with no compassion. But let’s not get carried away. An iguana isn’t going to kill you. And if you treat them with good love and care, they can be a companion for even the most affectionate of people.

How long do iguanas live?

Adopting a pet is always a commitment, regardless of what type of animal it is. But an iguana can live for between 20 and 30 years. So, before you adopt one, bear in mind that you’re committing to two decades of love and care.

There have been some cases where these animals have died before they’ve reached this age, mainly because they’re not living in the right climate. They are tropical animals after all, and places that are too cold can cause them to gradually get sick and die sooner than expected. They’re simply not suited to the weather conditions.

Where to keep an iguana as a pet

The best place to keep an iguana is in a terrarium. You should aim to create an environment as similar as possible to their natural habitat and large enough for them to move around in. If they can’t move, they’re likely to start hitting themselves with their tail and hurting themselves.

Your iguana’s environment should be quite warm, between 28 and 30 degrees. Never leave it outdoors, especially during cold weather, or it could die overnight.

What do iguanas eat?

Despite the fact that they descend from reptiles, iguanas are herbivores. So, lettuce, or any type of fruit or vegetable, is perfectly fine for them. You can also buy special food for them from the pet store, although natural food might be enough. It’s up to you.

Always have clean, fresh water nearby. When you go to put food in the terrarium, do so carefully if you are still getting to know each other. Otherwise, the iguana could feel threatened and attack you.

Does an iguana make a good pet?

Yes and no. It all depends on what you’re looking for in a pet. If you want an animal that responds to your calls, then clearly an iguana isn’t the one for you. Similarly, an iguana isn’t suitable for children, no matter how much your kids may want one. It’s simply too risky and both could end up getting hurt.

So, keep all this information in mind if you’re thinking about adopting an iguana, and think carefully about your reasons before you do so.

Remember that any animal is a responsibility and that once you commit, there’s no going back. Until death shall you part…

What is Rhinitis in Tortoises and Turtles and How to Treat it
Rhinitis in tortoises and turtles is common, and in today's article we'll give you advice about how to cure and prevent this contagious illness. Read more »
Link copied!
Interesting Articles
Tortoises and Reptiles
Captive Care and Breeding of the Common Sandfish (Scincus scincus)