The American Alligator, a Silent Predator

The American alligator is a rather aggressive reptile from the crocodile family. They mainly inhabit the areas between Florida and southern South America. Also, their diet is based on fish, small mammals, and even some reptiles. 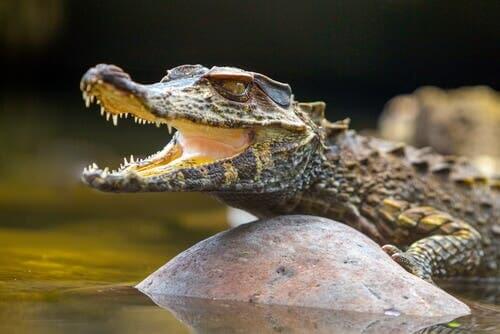 The American alligator is one of the most interesting animal species of all. Perhaps it’s due either to their aggressiveness or to the fact that they belong to the Crocodylia family. These animals originated over 83 million years ago. The truth is that this powerful silent predator is unique and their special characteristics are definitely worth learning about.

Firstly, this species belongs to the alligator family and it arouses much interest in humans. They’re powerful and very fierce, but beyond that, they possess extraordinary characteristics.

The American alligator is a subspecies that only lives in the American continent. Also, it’s distribution goes from the state of Florida, USA, to southern South America.

Currently, there are six known species belonging to the alligator family. Three of them are extinct though: Caiman wannlangstoni, C. brevirostris and C. venezuelensis.

The three remaining species are the Spectacled Caiman, which lives from Central America down to Venezuela. The other two varieties of alligators inhabit various areas of South America: the Yacare Caiman and the Broad-snouted Caiman. The latter is also locally known as yacaré.

Characteristics of an American alligator

The most abundant species in America is the Spectacled Caiman. This variety is generally between 5 and 8 feet long. However, 15 feet long specimens are often spotted in lakes. As for the weight, it can vary between 15 and 138 pounds.

Alligators are carnivorous predators, just like their crocodile cousins. In this respect, their diet consists mainly of small mammals, fish, and even other reptiles. On some occasions, they attack humans, but obviously this usually happens when the animal feels threatened in some way.

Thus, it’s important to note the alligator is a species that usually attacks small mammals because they don’t like working too hard to get their food. It’s for this reason that they only attack humans when we invade their space. This animal won’t hesitate to attack if it feels threatened.

The powerful and fascinating American alligator

The main differences between a crocodile and an alligator

People often confuse crocodiles and alligators. But, although they belong to the same family, there are certain characteristics that differentiate them. The main one is size – crocodiles are usually considerably larger than alligators. Also, the snout is rather characteristic so it’s helpful to differentiate them. In this respect, the shape of a crocodile’s snout has a “U” shape, while that of the alligator is pointy like a “V.”

Alligators reproduce in the rainy season; the female builds a nest and lays between 15 and 50 eggs in it. She incubates them for 12 weeks until the cuties finally break the shell. When this happens, parents protect and move the little ones to a safer area where they’ll also teach them to swim and hunt. This development process takes a few weeks.

The life expectancy of an American alligator

The life expectancy of an alligator in its natural habitat is 30 to 40 years of age. Alligators in captivity live longer as long as they have an adequate environment and plenty of food.

This is mainly due to the fact that the animal has a controlled environment and veterinarian care.

The American alligator is one of the oldest and most fascinating animal species on the planet. These ferocious-looking creatures, who cope perfectly well in both water and on the land, are rather unique and never cease to arouse human interest.

5 Animals That Live in Swamps
Swamps are unusual places that are formed from flooding. Amazingly, some creatures have had to adapt and there are now animals that live in swamps. Read more »
Link copied!
Interesting Articles
Tortoises and Reptiles
Captive Care and Breeding of the Common Sandfish (Scincus scincus)