The Belgian Blue and Its Muscular Appearance

The Belgian Blue is a cattle breed with a striking appearance as a result of the mutation of a specific gene. 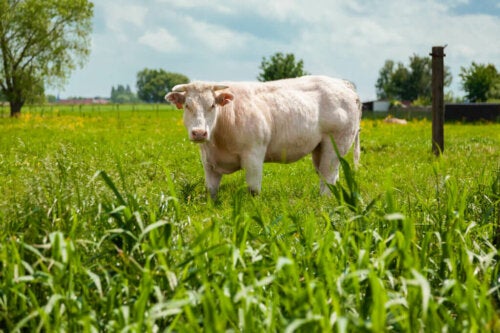 The Belgian Blue stands out, among other cattle breeds, mainly for its muscular appearance. This variety emerged in the late 19th century as a result of multiple crosses between different species, which is typical of Belgium.

Its musculature made it one of the best-known cattle breeds and brought about numerous rumors. Here’s everything you need to know about this controversial breed.

There are various factors responsible for the appearance of this cattle breed. We’ll explain them in detail in the following sections.

Belgium was where the Belgian Blue originated; it appeared in the late 19th century as a result of crosses between local breeds and British cattle. Thus, it was the result of the inheritance of a recessive gene that highlights its typical aspect.

Despite appearing in that period, no individuals of the species were publicly shown until the 1950s. At first, there was no expectancy for the survival of this species due to the high birth mortality rate.

Then, with the introduction of C-section, the number of surviving offspring and mothers increased. When Belgian farmers observed the usefulness and attractiveness of this species, they began to select the cattle with the aforementioned recessive gene.

All because of a genetic mutation

The large musculature of the Belgian Blue comes from a mutation in the genes. This mutation generates a protein called myostatin, which behaves as an inhibitor of muscle development.

Therefore, with the mutated version of this gene, myostatin doesn’t work properly. As a result, it causes an accelerated muscle growth typical of this cattle breed.

Another effect of this mutation is to prevent the formation of fat tissue in the muscle. This results in a very lean meat, which is greatly sought after in the cattle consumption world.

The Belgian Blue is a large animal with a powerful musculature that defines its body shape. This can be seen from the shoulders to the rump, on the back and loin.

Moreover, even if its legs are thin, it has enough strength to support its own body and move around easily. As for its skin, it’s soft and thin accompanied by a prominent tail that finishes its figure.

On the other hand, a slight sexual dimorphism can be observed, as the males are larger. Both genders exceed 370 kilograms (815 lbs) in weight after the first year of life. Adult specimens reach 900 kilograms (2000 lbs) in females, and 1400 kilograms (3000 lbs) in males.

Another eye-catching trait of the Belgian Blue is the color of its body due to its diversity. The predominant colors observed in this animal are white, blue, or even black.

Additionally, even though its size calls for respect, it’s been noted that the Belgian Blue is a very quiet animal. However, as in the case of other domestic or wild animals, it’s always best to be careful during handling.

As for the feeding of these cattle, it’s necessary to include in their diet a higher intake of proteins. This metabolic requirement is necessary to maintain their large musculature.

Therefore, its diet must be high in proteins and low in fibers. This way, they are able to maintain their muscle structure and have enough energy for their vital functions and to move around.

At a financial level, the breeding of this species can bring benefits, even if it must face the legislation of each continent. In Europe, for example, its breeding needs specific accreditation. This is because animal welfare is increasingly valued more than economic benefit; this breed has problems with complicated births and genetic selection maintenance.

Problems of the species

As already mentioned, the main characteristic of the Belgian Blue is its powerful musculature. This causes problems for mothers at the time of delivery, so a C-section is often necessary.

Most studies on this topic show that without a C-section this species has a significant mortality rate. This is partly due to its musculature, and partly because their mortality rate is higher in comparison with lower weight species.

Finally, humans created the Belgian Blue breed as a result of artificial cross-selection. Despite its great economic value and meat quality, its breeding presents some legal obstacles.

This is because some breeders prefer to obtain offspring without properly looking after the mothers, and today, legislation is starting to punish cases where the traded breeds are not respected and carefully bred.

The Healthy Breeding of Beef Cattle
If you like a nice steak, you should consider where that meat comes from. We'll tell you all about the healthy breeding of beef cattle. Read more »
Link copied!
Interesting Articles
Cows
Is It True that Cows Have Four Stomachs?

Cows
The Rumen, a Microbial Ecosystem Inside a Cow