The Giant kingfisher is a bird that was spotted for the first time in 1769. It's the largest specimen in the kingfishers' family and is quite striking. Not only in size, but also in the beauty of its plumage and habits. 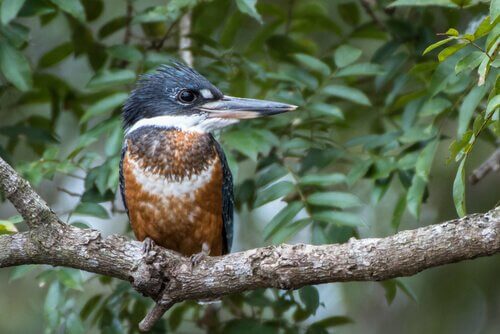 The giant kingfisher is the largest specimen of the Alcedinidae family. Its size, plumage, and habits make it a rather striking bird. Read on to find out more about it.

Characteristics and habitat of the giant kingfisher

Its scientific name is Megaceryle maxima. It belongs to the coraciiform birds within the subfamily of the Cerylinae, which are found only in Africa. The giant kingfisher can be found throughout the whole continent. However, it’s especially found in areas with dense vegetation near rivers and streams. This is where it finds most of its food.

Although it’s well below 2 ft tall, it’s still the largest species among kingfishers. In addition, it’s worth noting that it has a notorious sexual dimorphism. This means that the male is larger and more robust than the female.

In both sexes, the plumage is black and silver, or white. The tips of the feathers on the head are white and the chest is lighter than its wings or tail, with some brown or reddish spots.

In addition, the giant kingfisher has dark colored legs and a long black beak, just like its eyes. The characteristic sound of this bird is a strong “wak wak wak,” which is how it communicates with its kind.

The first time this species was described was during an expedition carried out by the German naturalist Peter Simon Pallas in 1769, in which he named the bird Alcedo maxima. Later, in 1848, another German naturalist, Johann Jakob Kraup, renamed it to the name it has today.

Eating habits and reproduction of the giant kingfisher

As with other members of the family, the giant kingfisher feeds on fish, although sometimes it adds crustaceans to its diet (mainly crabs). When the water is murky, and it can’t detect its prey (which it catches quickly with its beak), it eats insects, reptiles, or amphibians … what an opportunist!

In regards to how this species reproduces, the mating season depends on the area it inhabits at a given time. If its habitat is north of the continent, the months of nesting are between December and February. But if, on the other hand, it lives on the south, the mating period will be from December to January only.

Experts still aren’t sure if the giant kingfisher is monogamous. But what’s certain is that both members of a mating pair build their nest near the shores of a river. The home for the chicks is an extensive tunnel of up to 2 feet in length, leading to a spacious and comfortable chamber.

Before laying the eggs, both the female and the male carry provisions to the nest. After laying between three and five eggs, they take turns incubating them throughout a full month.

When the chicks are born, they remain in the chamber for another month, and then leave the nest for the first time after that period. After one more month, they finally leave forever. They’re completely dependent on their parents during their first eight weeks of life.

The habits of the giant kingfisher are still a mystery, but it certainly is a fascinating bird.

Raising Lovebirds: What to Keep in Mind
We call them lovebirds because of their strong bonds with their partners. They're very delicate, so don't take raising them lightly--here are some tips! Read more »