How Does Music Affect Different Animals?

For the ears of animals, the music we listen to can be stressful. However, some researchers have managed to "animalize" it, making adapted versions for each species and answering the question: How does music affect different animals? 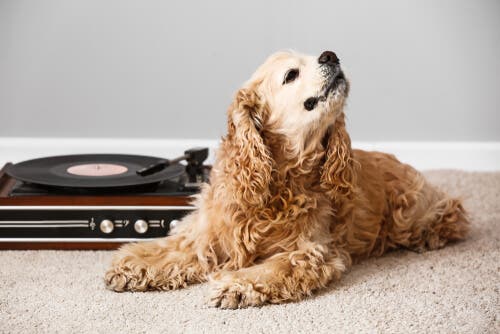 People have always been curious regarding the effects of music on animals. While it’s easy to experiment with our own pets, only science has managed to reveal how different animals react to this stimulus. In today’s article, we’ll look at their research, which answers the question: How does music affect different animals?

Several studies exist that use a variety of research strategies with different animal species. However, they found many answers to their question. Continue reading to discover several interesting examples and reflections on the subject.

The Blue Danube, number one in canine music

A study of 161 dogs living in a shelter evaluated the effects of different melodies and genres on canine behavior. They discovered that classical music–especially Strauss’s The Blue Danube–has the capacity to reduce stress in dogs.

In their research, they observed a significant increase in the time dogs slept and a decrease in barking. At the same time, the effects of heavy metal music were not so positive. In fact, it produced an increase in barking, a decrease in sleep time, and constant shaking. In short, all of the symptoms that a true metal fan probably wouldn’t experience while listening to their favorite genre before going to sleep.

How does music affect cows? Moo-sic to their ears

Just like dogs, cows also have a preference for classical music. Researchers have reported significantly shorter milking times when cows are listening to the great classics.

The Pastoral Symphony by Beethoven and Bridge Over Troubled Waters were two of the greatest hits out in the milking shed.

These melodies produced modest increases of 3% in milk production. At the same time, when researchers exposed livestock to noisy songs like Tigerfeet by Mud and Size of the Cow by The Wonder Stuff, there was no such increase in the production of milk.

For quails, variety is the name of the game

A few years ago, a research group set out to answer the question: How does music affect Japanese quails? More specifically, they studied the influence of music on the production, egg quality, behavior, and the economy of offspring. They published their findings in 2016.

Their study involved submitting a total of 165 chicks, divided into 5 groups. The researchers submitted animals to 12 hours of continuous music over the course of 4 months. One of the groups of birds–the control group–didn’t listen to any music at all. As for the remaining 3 groups, researchers exposed them to a combination of different genres: classical, heavy metal, and reggae.

Their analysis revealed that the quail that had listed to a mix of styles and classical music had greater body weight in comparison to the other groups. What’s more, the quality of eggs was greater in groups that listened to mixed music and classical music.

A recent study set out to determine the effects of music on memory and learning in rats. Their work involved 4 rats, which they exposed to music for 10 minutes each day over the course of 10 weeks.

The music they used was a “ratified” version of the Sonata for Two Pianos in D major by Mozart. Their adaptation was twice as fast and one octave higher than the original.

Researchers tested spacial learning and memory capacity in these animals using a radial labyrinth with 8 arms.

In the end, the authors reported that the rats exposed to music before and after the memory test displayed significant improvement in the acquisition of tasks.

It’s interesting to point out that the effect of music seems to be temporary. When undergoing the same test 4 hours after treatment, the observed improvement in the winning group had disappeared.

It’s clear that the music modified to the auditory range of rodents improved their performance. If the rats listened to this music before and during the test, they were better able to learn and memorize the labyrinth.

These results are promising, as they allow for the development of a rat model in order to study disorders in human memory.

Music can be a positive stimulus

In conclusion, this set of studies reveals that music may be a universal force of expression and care. It has the ability to mold emotions in both humans and animals.

It remains to be seen what the next studies will reveal regarding the effects of music on animals. Especially in regard to music adapted specifically to their hearing.

Dogs and Music – Do Animals Have a Musical Sense?
Is it true that dogs like music? Do they really have a musical sense? Well, it all depends on several factors. For example, how loud it is. Read more »
Link copied!
Interesting Articles
Birds and Lovebirds
Feather-Plucking - My Parrot is Pulling Out Their Feathers!