Ant-eating animals use their claws to rip an opening in the anthill or ant's nest and introduce their long snouts to catch their food using their tongues and sticky saliva. 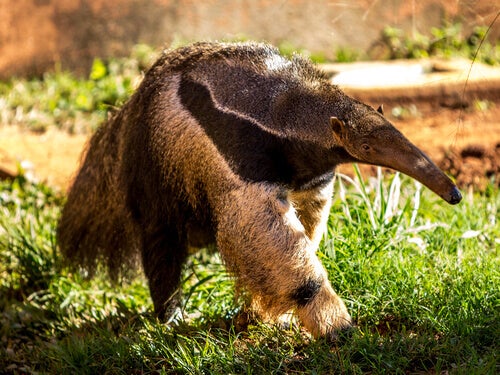 When we think about animals that eat ants, usually the first one that comes to mind is the anteater. However, there are many other species that feed on these insects: birds, arachnids, lizards, toads, and other arthropods such as beetles and even other ants.

Surprisingly, ants are, in fact, a very nutritious food:

Therefore, it’s only logical that many animals have made ants part of their diet and even their favorite snack. Up next, we’ll tell you more about them.

Translated from Greek, the word myrmecophagy literally means “to eat ants”. However, although termites aren’t ants, this name also includes animals that eat termites. This is because ant-eating animals and termite-eating animals both share similar habits. Moreover, and perhaps more importantly, both have adapted their bodies in a similar fashion to be able to consume these invertebrates.

An example of convergent evolution

Mammals that are also ant-eating species have developed a series of adaptations that make it easier for them to catch their food. We find it really interesting to know that animals from different taxonomic groups have developed these adaptations. This is seen in at least five separate groups or families:

The echidna family, belonging to the family Tachyglossidae in the monotreme order:

They are known to be the only egg-laying mammals along with the platypus, also from the monotreme order. Echidnas are similar in appearance to hedgehogs except for their size, as they have large spikes. In addition, they inhabit the islands of New Guinea, Salawati, Australia, Tasmania, and on the coasts of other smaller islands.

Translated from Greek, the name literally means “Hairy Tail”. This family has a unique species, the numbat (Myrmecobius fasciatus). This marsupial anteater mammal is found only in some remote areas of southwestern Australia. In addition, the numbat is Western Australia’s official animal emblem.

This is an order of placental mammals whose bodies are covered in large scales, popularly known as pangolins. The order contains a total of eight living species that inhabit the tropical regions of Africa and Asia.

This family also possesses a single living species: the aardvark (Orycteropus afer). These are very primitive placental mammals that are related to the tenrecs, elephants, and hyraxes. Moreover, they’re widely distributed throughout sub-Saharan Africa.

The Vermilingua suborder, of the order Pilosa:

Its common name is the anteater. They are native to Central America, and the North and Central areas of South America.  In addition, there are two families: Cyclopedidae (1 species) and Myrmecophagidae (3 species):

Evolution and adaptation of ant-eating animals

All myrmecophagous species show a series of adaptations that make it easier for them to catch ants and termites:

The tongue, an essential organ for ant-eating animals

If we consider that a giant anteater needs to eat around 35,000 ants or termites every day, we can suppose that it must have a highly effective hunting strategy. Naturally, this is the case. In addition, their tongues have a very peculiar set of muscles and neurovascular tissues which differ from the usual patterns that other mammals have.

These features allow them extraordinary handling of their tongues. In fact, they’re able to move them very quickly, up to 160 times per minute. In addition, the tongue is covered with thousands of small hooks called ‘filiform papillae’ that are useful for keeping insects stuck to them with large amounts of saliva.

Are ant-eating animals threatened by their way of life?

Undoubtedly. One of the main threats faced by ant-eating animals is habitat loss and a population decline of these very important insects in the trophic chain. Moreover, this biodiversity loss is usually the product of forest fires and deforestation.

Animals that eat ants are an example of different families that achieve the same morphological and functional adaptations through different evolutionary pathways. However, this finding is not entirely surprising, as we know that primitive mammals were initially insectivorous.

The Collared Anteater: All About this Species
The collared anteater is a typical species of South America. It dwells mostly in arid forest regions and savannas.It is also called the Southern tamandua. Read more »
Link copied!
Interesting Articles
Mammals
The Puma Is The Great American Predator