Laterality - Can Animals Be Lefty or Righty?

The term laterality refers to the human preference show for one side of their body over the other. Non-human animals can also be lefties or righties. Do you know what's your pet preference in this regard? Continue reading for some tips on how to find out. 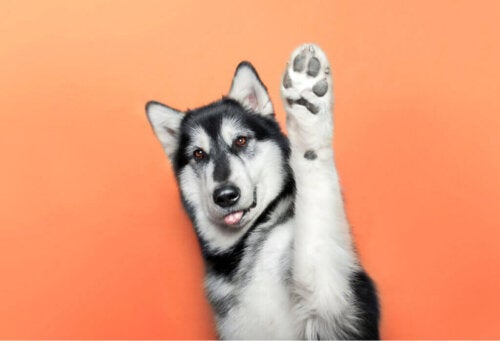 In general, humans are the only species with a tendency to rely on their right limbs. However, as incredible as it may seem, there’s laterality in most animals. What this means is that every species of vertebrates has the same probabilities for being a lefty or a righty.

This characteristic isn’t a condition in domestic animals, but it’s always interesting to know more about your companion pet. Today’s article will reveal which animals are lefty or righty and how to determine your pet’s preference.

Some studies reveal that chimpanzees and gorillas use their right hand about 65% and 75%, respectively. In fact, there seems to be a correlation with the hand their mother uses. Thus, researchers think these animals learn which hand to use, unlike humans. It seems to be an innate preference in us.

The matter of laterality in animals doesn’t only focus on primates and humans. Actually, any vertebrate will show a preference for the use of one limb over the other.

This could be the reason why all animals have more control over one side or the other.

The developmental processes that cause lateralization are still under study. However, some empirical animal studies revealed that these can have greater control over one side or the other.

Similarly, research conducted on rats shows that the concentration of a neurotransmitter in a given region of the brain of righty rats is different than in the lefties. This is a rather broad area that still requires a lot of research though.

In any case, we still don’t know exactly how the connections that could result in an animal being either righty or lefty take place. That is, we’re not sure they’re influenced by genetic, environmental, or behavioral factors. In fact, they’re mere theories still up for debate.

The fact that animals are righty or lefty doesn’t only concern their preferred limb. An animal that favors their right paw reveals the left side of their brain is more developed. Also, they may have more neural connections in that hemisphere.

The brain as such is divided into different areas distributed in groups of neurons. This could define many factors of an animal’s behavior if they use some more than others. For example, a right-handed animal may have a better spatial orientation than a left-handed one. On the contrary, a left-handed one may have a greater ability to concentrate.

By observing this behavior you would be able to determine which animals would be better for certain service positions. However, trainers prefer righties for these.

How to find out more about the laterality of your pet

It isn’t easy to determine if your cat or dog is lefty or righty. You’d think you could do so by just watching which limb they use to get up when you call them. Unfortunately, it isn’t that simple.

You’ll have to repeat a series of exercises dozens of times in order to be able to determine your pet’s preference with certainty. Here are some of them:

Finally, write down some notes about each activity to try to find out if your pet is lefty or righty. Laterality may not be as relevant for an animal’s routine but it’s always interesting to know more about your companions. Thanks for reading.

The Use of Tools in Animals
Tools are something we traditionally associate with human beings. However, the use of tools in animals is much more common than perhaps we first thought. Read more »
Link copied!
Interesting Articles
Animals
Discover One Indigenous Feline Per Continent