Omnivorous Animals: All You Need to Know

Omnivorous animals eat both meat and plants; they’re usually opportunistic and eat whatever they can find, depending on how much food is available. 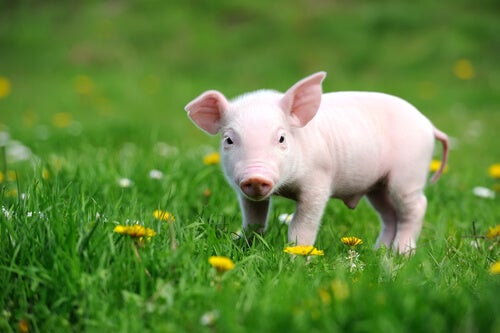 Omnivorous animals, a category which includes humans, are unified by one defining characteristic. They can ‘eat anything’; that is, they feed on both animals and plants. In this article, we’ll tell you more about these animals.

What are omnivorous animals?

The word ‘omnivore’ comes from the Latin omnis (everything) and vorae (eat). This means that these species ‘eat everything’, unlike herbivores and carnivores which only consume plants and meat respectively.

Omnivorous animals are usually opportunists and are willing to eat almost anything, so their digestive systems are able to ingest all types of food. Although there are cases of herbivores that sometimes eat meat, and of carnivores that occasionally feed on plants, this is normally due more to external factors (for example, drought, winter, etc.) than to a change in their metabolism.

Most omnivorous animals are mammals or birds, although some fish (like piranhas) and reptiles (some types of turtle) will also feed on anything. Here are some standouts among the most well-known:

One of the most common omnivorous animals, pigs have no problem feeding on anything put in front of them. With their thick snouts and highly developed sense of smell, they can detect food from a long distance, and thanks to their cloven hooves they can also dig up food.

Although in the wild many pigs – such as the one in the photo at the top of the page – are herbivores, when domesticated or kept on a farm they can consume grains, meat, grass, fruits and vegetables.

Famously, the ostrich is the largest and heaviest bird in the world, and one of the few that has wings but cannot fly. It’s also part of the group of omnivores along with its relative, the rhea. Ostriches live in Africa, they can run at high speeds and have black and white (males) or gray (females) feathers, since sexual dimorphism in ostriches is very pronounced.

Since they lack teeth, they swallow their food whole; they feed on plants (flowers and fruits), arthropods, small animals and even carrion. However, their voracity is such that they sometimes consume rocks, stones or minerals. Like camels, they can go for long periods without drinking water.

With the exception of the polar bear (which is 100% carnivorous), the bear family are among the most numerous omnivorous animals on the planet. Huge and with fearsome teeth, bears will feed on whatever food is available to them, such as fruit, insects, roots and meat.

Bears can grow to over 9 feet tall and weigh up to 1700 pounds (males are 20% larger than females). Like humans, they’re plantigrade – they use the entire sole of their foot to walk. And of course, they hibernate in winter when food is scarce and temperatures drop.

This all-black bird – even its legs and beak are black – is quite large and can live up to 15 years. The young move in groups, but the adults are monogamous – they live in pairs on the same territory until they die.

Of the eight subspecies of crow that exist, all are omnivorous and opportunistic; they feed on cereals, carrion, insects, fruits, small animals and even food waste. They’re also known for their intelligence when it comes to finding food and solving problems.

And finally, we obviously couldn’t leave man’s best friend off our list of omnivorous animals. In fact all canids, the family which also includes species such as wolves and foxes, are true omnivores and can eat almost any food.

Although domestic dogs have become accustomed to processed dog food, in fact their digestive system can deal with all different types of foods, including fruits, vegetables and cereals. However, they can’t eat chocolate, sauces, eggplant, pork or candy, since these can make them sick or intoxicate them.

Can Cats and Dogs Eat the Same Thing?
There can be certain similarities in the feeding of cats and dogs. Find out whether cats and dogs eat the same in this article. Read more »
Link copied!
Interesting Articles
Invertebrates
The Giant African Land Snail in Captivity