Differences Between Rhea and Ostrich

Even if it’s true that both species of birds share similarities such as the fact that they can’t fly and they run at high speed, there are also significant differences, such as their size. 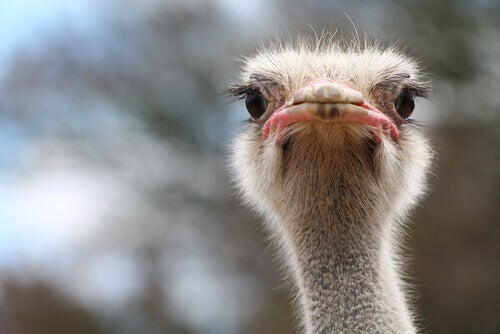 At first glance they may look the same –or quite similar– but there are quite a few differences between rhea and ostrich. Would you like to know what they are? In this article, we’ll tell you.

This is a South American endemic bird, which can reach 180 centimeters (6 ft) in height –the female is smaller– and has three toes on each foot. The rhea can’t fly, but it can run at high speeds when it feels threatened.

It forms groups of up to 30 individuals in winter and autumn. Still, during the reproductive period they separate into smaller “families” made up of one male and several females. These birds can lay up to 40 eggs –among the largest in the world– in one week, and the father is in charge of incubating all of them for about a month.

This is the largest and heaviest bird in the world –3 meters (10 ft) and 180 kilos (397 lb)– and it lives in various regions of Africa. Its small wings don’t allow it to fly. However, if it needs to flee from danger, it can run great distances.

With a small head, and long neck and legs, the ostrich has black (male) or dark gray (female) plumage, and is known for its bulging eyes and striking beak.

It’s a herbivorous animal, but not strictly so. Depending on the situation, besides consuming fruits and flowers, it can ingest rocks, minerals, or stones when it’s very hungry.

Furthermore, the male is responsible for building the nest, where each one of its partners –it has a main one and several secondary ones– lays eggs, which are the largest of any bird species in the world.

Differences between rhea and ostrich

While the rheas inhabit South America, ostriches live in East Africa. The former choose plains, mountains and quasi-forest areas, while the latter live in desert regions, with great thermal amplitude between day and night.

The rhea has three toes on each foot, while the ostrich has only two. The former can run up to 60 km/h (37 mi/h) and the latter is a little faster, reaching 70 km/h (43 mi/h). However, both are capable of sustaining their speed for half an hour.

While male and female rheas have similar colors, there are differences in the ostrich’s plumage. Males are black and females are brown. To differentiate the sexes of the rhea, you only have to compare their sizes –the male is bigger.

The eggs of both species are among the largest of any bird species. However, there’s one difference between rhea and ostrich. The males of the latter are exclusively responsible for incubating the chicks. In the case of the former, both father and mother share this responsibility.

Another interesting difference between rhea and ostrich is that the male rhea doesn’t build a nest per se, but takes advantage of natural hollows in the ground. The ostrich male, on the other hand, digs into the ground to a certain depth to hide the eggs.

There are only two subspecies of rheas: the American, or Common, rhea (Brazil, Paraguay, Argentina and Uruguay) and the Darwin’s, or Lesser, rhea (Chile and Argentina).

Which Are the Fastest Birds?
What are the world's fastest birds? Some are very obvious like the peregrine falcon, but there are also some that you wouldn't expect to be on the list. Read more »
Link copied!
Interesting Articles
Birds
Discover the Emblematic Red Kite