The Largest Bird Eggs in the Animal Kingdom

Normally, the largest bird eggs in the animal kingdom belong to those species that are larger when they reach adulthood. Today, we'll tell you more about them. 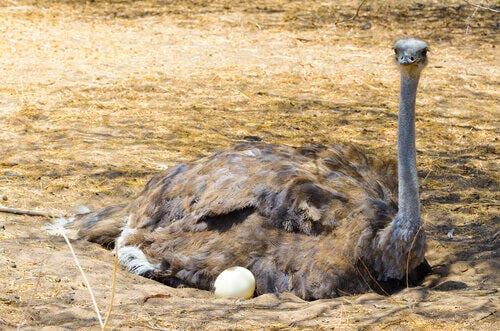 An ostrich isn’t the same size as a sparrow… not even at birth! Therefore, baby ostriches–and other large birds–need a place to develop according to their needs. In this article, we’ll tell you all about the largest bird eggs that exist in the animal kingdom.

What are the largest bird eggs?

To get an idea of which the largest bird eggs are, we can analyze the size of the species when they reach adulthood. In most cases, this ‘rule’ works. Here are some of them:

The ostrich, which appears in the cover photo of this article, is one of the largest birds in existence. Not only that, its eggs are the largest in the animal kingdom. In fact, they can measure almost 10 inches and weigh almost 2.5 pounds! To give you an idea of its dimensions, it’s equivalent to two dozen chicken eggs.

These eggs are white and light yellow, a characteristic that prevents them from being overheated by the sun or the high temperatures of the savannahs where they live. When the chicks are born, they are already quite big, and the father is in charge of taking care of them.

A direct relative of the ostrich, this large bird–which doesn’t fly–lives in Oceania and its plumage is dark gray. Until a century ago, it was very common to spot these animals. However, their population has decreased quite a lot.

One interesting fact in relation to the eggs of this species is that they’re dark green. And, of course, they’re large–almost like those of their close relatives, the ostrich.

Another similar characteristic is that the male is in charge of covering them and taking care of the chicks when they’re born. This is because he can have several females at the same time. In that sense, fathers are then responsible for ‘looking after’ all the siblings, even if they’re from different mothers.

Although this New Zealand endemic bird is small in size, the female lays eggs that can be 5.5 inches high and 3.5 inches in diameter.


Male kiwis have the task of caring for them for 10 weeks in underground nests or burrows that the couple makes together. It’s worth noting that the parents don’t feed their nestlings. That’s because, as soon as they’re born, they’re developed enough to leave the nest and look for their own food.

This species of bird, related to ostriches, is native to Papua Guinea. It lives in tropical forests and is a large animal with long, thin legs and bright blue colors on the neck and head.


The mating season of the cassowary takes place between May and June. Each female lays three to eight large eggs, which are blue-green in color and are about 5 to 6 inches long. They’re incubated for almost two months by the male and, at birth, they remain with their parents for nine months.

This bird, native to Eurasia and North Africa–and domesticated in several parts of the world–lays eggs three times larger than those of chickens. The common goose is the largest of the duck family and possesses a robust body, pink legs and beak, and brownish-gray plumage with darker areas.


The goose is a monogamous animal whose reproduction takes place between March and April, when they build their nest near lakes or swamps. Each female can lay between four and six eggs per season. These are white and elliptical in shape and, unlike the others on the list, the mother is responsible for incubating them.
How Do Birds Actually Build Their Nests?
You've probably seen how birds go back and forth to build their nests for shelter, for their partner and their offspring. Learn more in this article! Read more »
Link copied!
Interesting Articles
Birds and Lovebirds
Feather-Plucking - My Parrot is Pulling Out Their Feathers!

Birds and Lovebirds
The Amazing Cognitive Abilities of Parrots

Bird intelligence is evident in corvids, but many species in the group of parrots also stand out for their amazing…

Many consider pigeons a plague due to their proliferation in cities. In fact, some people even develop a true phobia to their presence. However, home pigeon keeping continues to conquer…