All About Ducks and Their Relatives

Many times, when we've approached a body of water, we hear the typical "look, ducks!". It's the colloquial term that we use to refer to many species of ducks and their relatives. But, are they really all ducks? 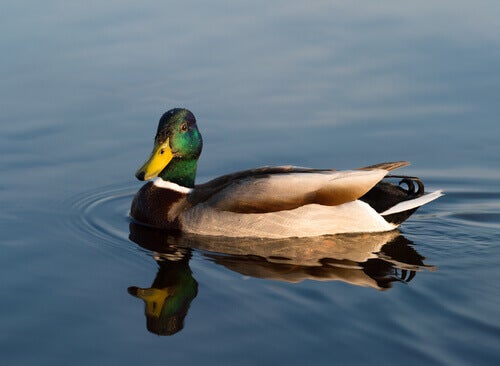 Ducks and their relatives (teals, pochards, shelducks etc) are a group of ducks known all around the world. They constitute the mallard family, which involves many different species. Ducks are migratory aquatic birds that display multiple adaptations to their environment. For example, webbed feet, waterproof feathers, and a flat beak.

Some of the most interesting species

The mandarin duck, whose scientific name Aix galericulata refers to its eye-catching feathers, has several characteristics that set it apart from other mallards. First of all, it mates for life. Second, it’s not food at running, swimming, or flying. Therefore, it’s vulnerable to attacks by predators–especially crows, falcons, and foxes.

Mandarin ducks are considered bearers of good fortune, love, and conjugal affection in eastern Asia. Therefore, it’s customary to give couples these ducks in important weddings.

Also known as the Carolina Duck, Aix sponsa is another duck with ornamental plumage. This animal feeds on aquatic plants as well as fallen acorns and chestnuts. In the summer, its diet consists of insects, snails, and small aquatic animals.

Ducks and their relatives: Typical mergansers

These birds are characterized by their long and narrow beak with a serrated edge. With this beak, they’re able to hold onto the slippery and wiggly fish that they feed on. Today, there are five different species in existence.

In their attempt to court potential mates, these ducks use miming. First, they splash in the water and then stretch their necks upward, just like when they drink water–but only with symbolic gestures.

These birds are a subfamily of the Anatidae (duck) family. Skittish and wary, they tend to be unapproachable. In fact, while they eat, there are always a few members of the group that are constantly on the lookout. If one of them goes “off duty”, another will take its place immediately.

The common goose (Anser anser) walks with ease, without the typical swagger of domestic geese. It runs swiftly, swims well, and can even swim underwater to escape from danger.

These geese are the origin of the domestic goose. That’s because the Romans began to bloat their livers with flour, milk, and honey in order to obtain what we now know as foie-gras. What’s more, its feathers have long been used to make feathers for writing.

These birds belong to the gaviformes order. In other words, they’re not exactly ducks, but they are relatives. Like ducks, they’re also aquatic birds, and they fly from time to time at great speeds. In fact, they’ve been known to reach speeds of some sixty miles per hour.

Vocalizations between individuals are very interesting. One minute they sound like wolves howling, and the next minute it sounds like they’re laughing.

Ducks and their relatives: Podiceps and little grebes

These animals belong to the podicipediformes order. Podiceps differ from loons in that they’re smaller and have horizontal feathers that stick up from their heads. However, like loons, they sleep on the water with their heads tucked under one wing. They live in lagoons and wetlands where they build their floating nests.

A strange habit these birds have is that they ingest their own feathers and also feed them to their young. In the stomach, their feathers turn into a small, thick dough that seems to help them regurgitate fish bones.

Ducks and their relatives

All of the birds mentioned, and many others, fall into what we tend to group together as “ducks”. However, as we’ve pointed out, many of these species aren’t technically ducks. In fact, they belong to another family altogether.

This is just one more example of the great number of species that are hiding behind everyday terms. And there’s still so much we can learn about these animals.

Swans – Characteristics of a Most Graceful Animal
The swan, a most graceful animal, is often used as a symbol of beauty and eternal love. They're monogamous. That is, they mate for life. Read more »
Link copied!
Interesting Articles
Birds
Tips for Raising Domestic Turkeys