The characteristics of these species are especially geared to survival in icy ecosystems where scarce vegetation, birds, and terrestrial and aquatic mammals coexist. 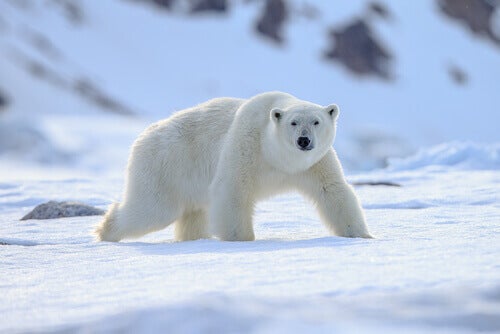 The Poles are some of the most hostile areas on the planet for human life, but some species have adapted to their extremely cold conditions and lack of vegetation. There are many differences between the North and South Poles, but both are very difficult ecosystems. Below, we’ll take a look at some polar animals and the survival mechanisms they’ve developed.

Animals at the Poles

Different animals live in the North and South Poles. However, in both cases, they’ve had to adapt to the inhospitable and truly extreme circumstances of their environment.

In order to do this, polar animals have developed strategies that allow them to conserve heat. They’re large, warm-blooded animals with thick layers of skin or fat.

In most cases, they depend on the resources of the sea for their survival. Some land animals at the Poles have developed adaptations for swimming, such as fins.

This geographical area is located in the Arctic Ocean, at the northernmost axis of the planet; the sea there is covered by an ice cap. Unlike the South Pole, there’s no land here, only ice. However, it’s not as cold at the North Pole as at the South Pole.

The North Pole has permanent sunlight for six months of the year and total darkness for the other six. This situation affects the life cycles of the animals that live there.

Temperatures reach extremes of -60 and -75ºF. Food in this environment is scarce; despite this, more species live at the North Pole than at the South Pole.

Animal species of the North Pole

Among the animals of the Poles, the polar bear is perhaps the most emblematic; they live only at the North Pole and are fully adapted to life on ice. Their white color allows them to camouflage themselves in the snow and their black fur helps them retain heat. Their paws are covered with fur and their claws are very sharp to prevent them from slipping.

During the summer, polar bears migrate south. The melting ice forces them to move because their main food is seals, and they need the ice to hunt them.

Mainly for food reasons, polar bears move southward at the beginning of summer, without food, and begin their hibernation. When winter arrives, they return north and the hunting season begins.

Walruses, seals, humpback whales, reindeer, and Arctic foxes and wolves also live at the North Pole. The latter have developed very wide paws to make walking in the snow easier.

The geographic South Pole is the southernmost point of the planet, located in Antarctica and surrounded by the Atlantic Ocean. It’s located on a flat plateau, with an ice thickness of approximately 9000 feet. Below this layer, at sea level, is the land.

Animal species of the South Pole

The animals of the South Pole are mainly found in Antarctica and the surrounding islands. There are also species that live in the polar sea, which are especially adapted to the low temperatures.

The penguin is the best-known animal of the South Pole; this species lives exclusively in that region of the world. In general, they inhabit the less frozen areas of Antarctica.

Penguins are birds, but they can’t fly. And, although they swim very well, they can’t travel long distances. Nor do they need to, as their habitat has everything they need to feed and survive without major problems.

Other species that live at the South Pole are seals, whales and 35 species of sea birds, among them various types of seagulls, albatrosses, and pigeons.