The largest land predator in the world is the perfect gauge for climate change. Its great ability to adapt has enabled these mammals to set unbeatable swimming records. In fact, one female swam 425 miles in just 9 days! Today, we'll tell you more things you didn't know about polar bears. 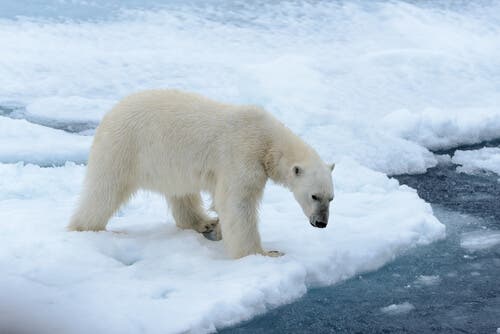 The polar bear is one of the most well-known animals and is a banner of climate change. What’s more, it’s the largest land predator in the world. The fact that this Ursidae lives in an inhospitable habitat has given it a series of very remarkable adaptations that allow it to survive. Keep reading to discover more interesting things you didn’t know about polar bears.

The effects of climate change on polar bears are very significant and, for the most part, human beings are to blame. As a result of global warming caused by man, polar bears have less and less ice in their habitat and more and more water. Therefore, finding food is an ever-growing challenge.

This phenomenon has caused polar bears to set new records among their species when it comes to swimming. The current record is held by a female polar bear that swam 425 miles in just 9 days.

Unfortunately, these long journeys are now necessary in order for polar bears to survive. And, as they search desperately for food, they also lose a great deal of weight.

Another interesting detail: Their unique diet

Polar bears feed on large quantities of fat from animals like seals and whales. This allows them to form their own layer of fat, which protects them from the frigid arctic temperatures.

Any other animal would be unable to assume such a diet, but the polar bear is a unique metabolism of cholesterol. Therefore, polar bears can handle this type of diet, allowing them to withdraw cholesterol from their blood and use it directly.

This unique metabolism has another consequence: The liver of a polar bear is very toxic, given its high concentration of retinol.

Another thing you probably didn’t know about polar bears is that they don’t eat penguins–though many assume they do. This is because penguins live near the South Pole, while polar bears live near the North Pole, meaning the two animals have no contact at all.

If you had to name a few facts about polar bears, you’d probably say they’re white, right? However, that’s not the case. They actually have black skin and transparent fur. Therefore, it’s not uncommon to witness diverse tones depending on variations in their diet.

This combination of transparent fur and black skin allows polar bears to blend in with the snow. At the same time, it allows them to retain heat. That’s because sunlight passes through their fur and warms their skin. Polar bears are the only species among all bears that possess this unique characteristic.

But that’s not the only interesting thing about polar bears when it comes to their anatomy. Their paws function like snowshoes, thanks to the rough pads on the bottom of their feet and the fur between their toes. This allows them to move about easily on the ice.

Polar bears are solitary animals, and males and females only come together during mating season. Afterward, mothers spend the winter alone, saving up the energy they need in order to give birth to their young. While polar bears relate to one another through markings and scents, it’s interesting to note that they can go months without actually encountering one another.

One of the most remarkable things about polar bears, when it comes to reproduction, is that their gestation takes place through embryonic diapause. In other words, months can go by from the time polar bears mate and the beginning of fetal development. As a result, mother polar bears give birth to their young in the spring.

True hibernation consists of an animal lowering all of its vital signs and body temperature. Pregnant females cannot carry out this process and, therefore, do not hibernate.

Newborn polar bears weigh between 16 and 24 ounces. They spend four months in the den, during which time they drink very energetic milk that allows them to increase their weight to some 33 pounds. This is a major accomplishment by their mothers.

Thanks to all of these amazing characteristics, polar bears have been able to survive successfully in their natural habitat. We hope that human activity and climate change won’t lead to the extinction of this animal that’s so unique among mammals and even other bears.

Meet the Cutest Polar Bear on Social Media!
You have certainly seen the cutest puppies on the social media by now, but have you met the cutest polar bear yet? Read on and get to know him! Read more »
Link copied!
Interesting Articles
Mammals
All About the Caracal: Characteristics, Feeding and Habitat