Both its morphology and its behavior illustrate this mammal's adaptability. It can endure very harsh climatic conditions in terms of the cold. So much so, that this animal doesn't migrate or hibernate when the winter season arrives. 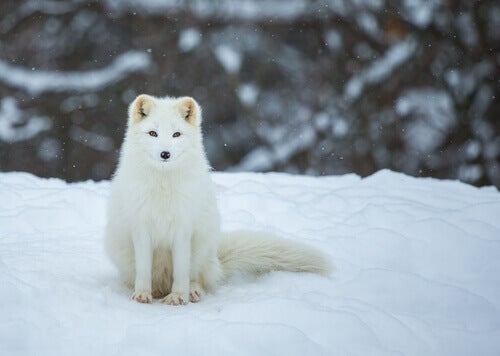 As its name suggests, the polar fox, or arctic fox, lives in the northernmost latitudes of our planet. This animal is an example of perfect adaptation to its habitat, so we invite you to discover what this species of fox is like and how it can live in such hard conditions.

Characteristics of the polar fox

The polar fox is a little smaller in size than its close relatives. It can be between 14 and 22 inches long, without including the tail, and weighs an average of 6.5 to 9 lbs.

As for their physical characteristics, their white fur makes them easily recognizable. In fact, they’re only totally white in winter, since in summer their fur turns brown or gray. Their fur’s color is one of their greatest survival strategies, as they can camouflage with the color of the ground: snow or stone.

In proportion to other foxes, their ears are smaller and their snout is less sharp. As a result, they lose less body heat and can survive at such low temperatures. In addition, the soles of their paws have hair to prevent them from slipping on the ice.

Their tail is long and very fluffy. Not only does it help them keep their balance when jumping or running, but they also use it as a blanket when they need to sleep.

This fox’s breeding season starts later than that of other animals, but polar foxes make up for it with very large litters. They can have more than ten cubs in a single litter.

The polar fox is also a nocturnal animal, similar to its relatives that live further south. However, if they live in unpopulated areas, they can also be very active during the day.

Although they can hunt, they choose to be scavengers instead whenever they have the opportunity. They usually roam the areas where polar bears hunt to take advantage of the remains of their prey. However, if they find nothing to eat, they’ll usually hunt small mammals such as lemmings, mice, or waterfowl. In very exceptional situations, when they can’t find any meat, they’ll feed on berries or algae.

The polar fox is a very active animal and one of the few that live in these latitudes and don’t hibernate or migrate when winter arrives. It’s so well adapted to the cold that it tolerates low temperatures very well. However, it will take shelter in burrows that it digs in the snow if a storm or blizzard breaks out.

It’s also a social animal that lives in groups, although it goes out to hunt or look for food alone. The polar fox lives in burrows in the ground, which can be very complex, with multiple entrances and exits. These burrows can be used for decades by different generations of foxes.

It’s common for polar foxes to be monogamous, with each breeding pair caring for the cubs until they’re able to fend for themselves. The foxes that don’t breed that season act as lookouts and den guards to help the cubs survive.

The polar fox lives in the northernmost territories of the planet, spread through America, Europe, and Asia. In addition, it also lives on the islands of the Arctic Circle, which could be reached on foot hundreds of years ago. Moreover, Siberia is the only area where they can live a little further south.

The ecosystems it usually inhabits are the tundra and ice blocks, although it can sometimes be seen in boreal forests. In addition to living on the coast, it also lives in the mountains hundreds of feet above sea level.

These ecosystems have several elements in common: temperatures are extreme, they consist of large plains covered with snow for much of the year, and there are few trees or obstacles, except in taiga. It’s in these kinds of habitats that polar foxes are most comfortable and can proliferate.

Therefore, in general, the polar fox isn’t endangered. However, the Scandinavian population, in particular, is considered threatened. As a result, there are laws that protect them from hunters.

Nevertheless, the red fox, one of their predators, is gaining ground. This is presumably due to climate change and the loss of their snowy habitat. Still, there are other factors to consider.

The polar fox is an example of an animal that adapted perfectly to its habitat. Both its physique and behavior help it to survive in one of the most extreme climates on the planet. Perhaps this is why they’re not prone to extinction, although their movements are carefully monitored in case there’s a need for alarm in the future.

The Arctic Fox: A Sociable and Territorial Animal
Also known as the polar fox, it lives at the most northerly point of our planet. In this article, we'll tell you all about the Arctic fox. Read more »
Link copied!
Interesting Articles
Mammals
Meet The American Black Bear: Characteristics and Habitat