Sleeping Habits: Why Do Giraffes Get Little Sleep?

Giraffes sleep standing up most of the time, which are usually small ten-minute naps. 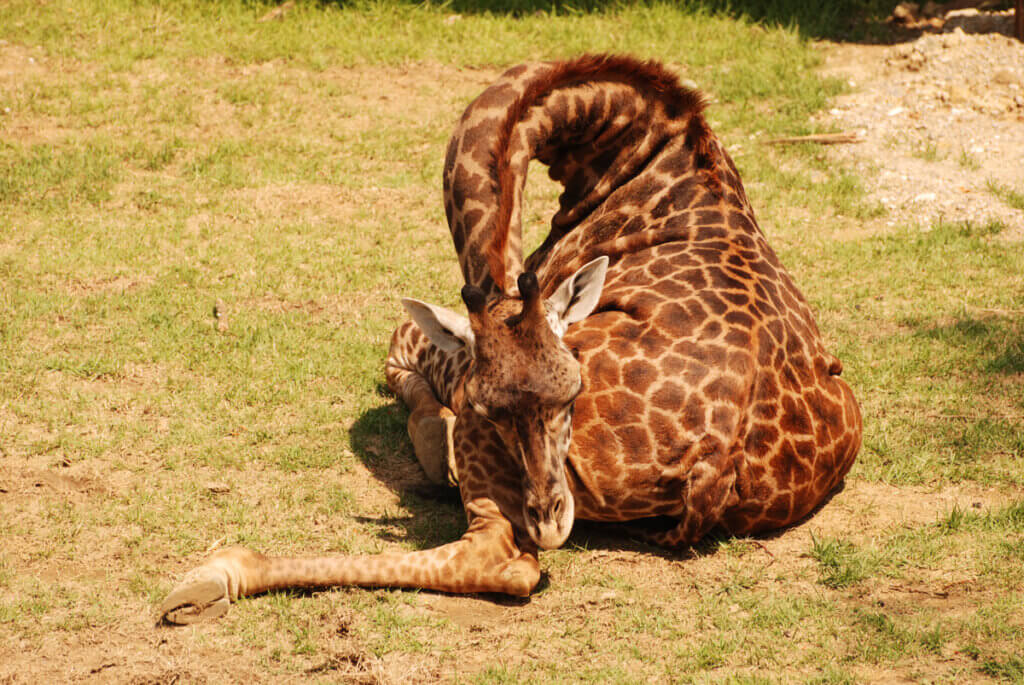 If we look for the least sleeping species in the animal kingdom, among them we’ll find the giraffes. Giraffes get little sleep and, because of this, avoid the risks of being easily hunted. Moreover, although they can lie down to rest, they usually do it while standing for most of the day.

All animals need to sleep to replenish their energy and maintain adequate physical and mental health. However, this doesn’t mean that they all need the same hours or have the same mechanisms for quality sleep. Giraffes have a particular way of resting and we’ll be talking more about it up next.

Do giraffes sleep standing up?

Giraffes, like other four-legged animals, sleep while standing up. This way, they can act more quickly if it’s necessary to flee or defend themselves by kicking a nearby predator. They can also lie down to rest, but it would take them longer to lift their whole body and react.

But how can we tell if they’re sleeping while standing up? While resting, giraffes stand with their necks stretched out but leaning forward.

We can tell the sleep phase in which the animal is in by its position. In other words, during deep sleep, giraffes will lie down.

When they sleep lying down, giraffes bend their legs, arch their necks, and rest their heads on their hindquarters or on the ground. Similar to how swans sleep.

An adult giraffe needs only between two to four hours a day of complete rest, but it doesn’t do so often, as the longest period doesn’t usually exceed two hours.

These African giants usually sleep during ten-minute intervals spread throughout the day. The time of deep sleep in each nap lasts only one minute.

There seems to be a variability in the amount of time that they spend lying down in deep sleep according to their age since newborn babies and young specimens need more deep sleep than older giraffes.

Wild giraffes generally spend part of the night lying down until dawn and alternate this rest with periods of exploration or rumination.

When the moon is at its brightest, they’re more active and spend more time feeding than lying down or ruminating. Mothers with their young have their own nightly routine, as the mother remains alert to the environment and the young are hidden from predators.

Why do giraffes sleep for only ten minutes?

There are several theories that explain why these animals have evolved to have such short sleep times.

A long deep sleep means a greater risk of being caught by a predator. However, adult giraffes aren’t usually easy prey for big African cats because their long, powerful legs and large size provide a very strong defense against them. Predators don’t take the risk of suffering one of their strong kicks lightly.

Sleeping while lying down in the way these mammals usually do means the loss of a few very valuable seconds in the presence of a predator. The approximate time to stand up is usually about 15 seconds every time since it’s not easy for the animal to stand up from this posture.

To unfold their legs, stretch their necks, and run away can mean the difference between life and death. A lying down giraffe is much more vulnerable to the attack of a lion, which can easily reach the head and asphyxiate its prey before it can stand up.

The need to constantly ruminate

Giraffes are ruminant animals and spend much of the day chewing their food. Rumination can take up to 75% of a herbivore’s time, especially one this size.

Sleeping small spaced-out naps instead of several hours of deep sleep can be managed as a parallel activity to feeding and rumination.

Sleep in other species

This particular way of sleeping is also valid for other large herbivores such as horses or cows. In different habitats, the same strategies have been naturally selected for the survival of the species in the face of the dangers of wildlife.

Evolution has maintained another series of modifications of sleep physiology adapted to the natural environment. Some examples are unihemispheric sleep in migratory birds and dolphins.

What do you think about the sleeping habits of these animals? We hope you enjoyed today’s article!

The Animals that Sleep the Least
The fact that some domesticated species made the list of the animals that sleep the least may be surprising. Read on to discover them! Read more »
Link copied!
Interesting Articles
Birds and Lovebirds
Characteristics of the Sparrow Family