Why Do Some Animal Mothers Eat Their Offspring?

Thinking about eating our offspring is something impossible to conceive, but not all animals can afford the losses implied by parenthood at certain times. 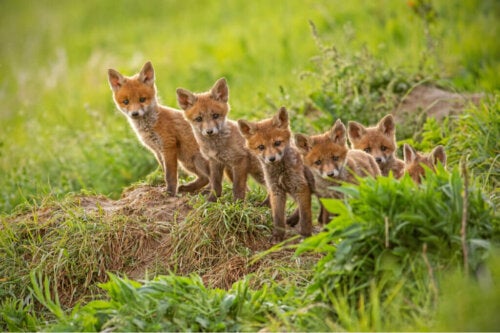 To think that mothers eat their offspring is inconceivable for any human being. We have the taboo of cannibalism written in our genes, and infanticide is one of the worst crimes we can think of in today’s society.

But what adaptive purpose does this behavior have in nature? The most logical thing for a human being would be to think about the perpetuation of genes. If there are no descendants, the species becomes extinct. Therefore, the idea of eating our offspring seems like an act of self-destruction to us. But not all species are cast in the same mold.

The evolutionary effectiveness of cannibalism

It seems logical to think that the best way to perpetuate the species is to have as many children as possible. However, this reflection arises in the mental context of having sufficient resources to maintain them, as well as a safe refuge and a partner to help in their upbringing. In the case of animals, this isn’t always the case.

While humans have one offspring at a time —sometimes more, but never exaggeratedly large numbers— other animals can have litters of more than ten offspring. In addition, they have to defend themselves from predators in nature, and sometimes the opportunities to reproduce are limited and time is short.

When this occurs, if all offspring survive against all odds, this can lead to the death of the parent and, consequently, of the litter. Many times, the best thing for the survival of the species is to reduce or abandon a litter. This ensures that the parent may have more offspring in the future.

Why mothers eat their offspring?

We’ve seen that for some species it’s complicated to maintain their offspring. This has been studied for a long time due to the surprise it causes. As an example of this fascinating phenomenon, here we present the three main theories that explain why some mothers eat their offspring. Also, we include some curious cases.

The story that hamster mothers and other rodents eat their young is quite popular. It may sound destructive, but let’s think of it this way: female hamsters can have litters of up to ten young.

The resources needed by that mother to support ten offspring —energy, milk production, foraging and many others— can compromise its survival or that of the litter itself. This doesn’t benefit any of the parties involved at all.

In fact, as part of experiments done in captivity, it’s been noted that the behavior of the hamster mother changed when the number of pups was artificially modified. If offspring are removed, the parents’ cannibalism ceases; on the contrary, if more offspring are added to the litter, mothers begin to eat their offspring.

The explanation that scientists gave for this type of behavior is that the mother solves two problems at the same time. Firstly, it obtains nutrients and energy by way of cannibalism. Secondly, the mother reduces the litter, which increases the chances of survival of the remaining offspring.

2. The offspring as an emergency resource

Many times, looking for the reason why mothers eat their offspring, we find certain projections in the future. When there’s a nest that can’t be abandoned and a predator attacks, the most adaptive option is often that of abandoning the nest, and waiting for a future opportunity to have another litter.

A good example of this is the Greater Martinique skink (Lacerta mabouya), a reptile native to the Antilles. When another animal attacks its nest trying to prey on its eggs, the female eats them beforehand. Thus, when the mother eats its offspring, it prevents the predator from reaching its goal. Also, it takes advantage of the energy supplied by this act of cannibalism to reproduce again.

3. Not only mothers eat their offspring

In the marine world, we also find examples of parents eating their offspring — but this time it’s the fathers. This is the curious case of the sand goby (Pomatoschistus minutus), which, after fertilizing the eggs of several females, stays to care for them until they hatch.

The problem comes when one of the eggs takes too long to hatch. As the male doesn’t leave the nest until all the young have hatched, sometimes it eats them in order to be able to continue its search for new nests to fertilize.

In conclusion, we’ve seen the importance of maintaining a balance of the upbringing costs. Otherwise, both litter and parents could perish. Once again, we’re deconstructing misconceptions that prevent us from understanding the other living beings around us.

Bonobo Mothers Help Their Offspring Find a Mate
Bonobo mothers, in fact, work hard at ensuring the propagation of their genes. Does it sound familiar? They remind us of human beings. Read more »

Link copied!
Interesting Articles
Mammals
Why Do Bears Like Salmon?