The Crested Porcupine: Characteristics and Habits

Originally from Africa, these animals also live in Europe. These animals are practically immortal during a confrontation. They have long spikes. Even though these spikes aren’t poisonous and they can’t throw them, they warn enemies away with auditory and visual warnings. They can also cause injuries and wounds prone to serious infections. 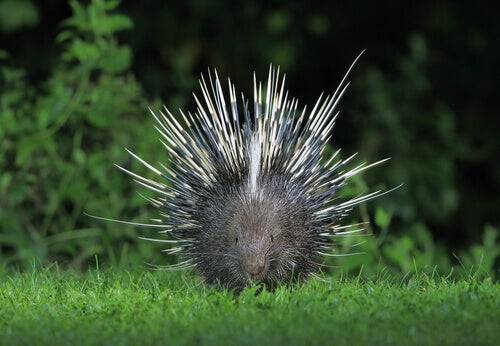 The crested porcupine (Hystrix cristata) is a rodent that most people recognize. They’re covered in sharp spikes that make it very difficult for predators to hunt them.

Normally, when we talk about hedgehogs, we’re talking about much smaller animals that have small spikes that surround their entire bodies uniformly. However, porcupines have much longer, more flexible spikes.

The spikes of these animals are usually in clusters and fall out. However, they grow again as they are simply hairs coated in keratin. People believe that porcupine quills have antibiotic capabilities that protect these animals if they accidentally harm themselves.

One of the most curious features of the crested porcupine is where they live. Some of you might think they live in some exotic places. And you’d be right! They live in many regions of Africa, such as Morocco.

However, one of the most curious facts about this animal is that they also live in Europe. In fact, there are many of these animals in Italy. The origins of these populations are very mysterious. In fact, we know from the fossil records that porcupines came to Europe a long time ago, and some experts believe that the Romans introduced them to the European continent.

This animal’s defense strategy is triggered by multiple stimuli, such as suspicious smells, sounds, or sudden movements. Their defense consists of a series of different behaviors. First, their spikes become more erect. Then, they chatter their teeth and emit odors, and, finally, they attack.

Their coloring and spikes are helped by the fact that most of their predators don’t detect colors. As a result, animals that try to prey on porcupines often confuse them with skunks, which is not a tasty treat for any carnivore. However, even if they aren’t mistaken for another animal, porcupines also have a great capacity for defense.

When porcupines are threatened, their quills make them appear larger. Then, they make noise and chatter their teeth. Finally, if the enemy continues to advance, they resort to a strong smell that emanates for their skin. Ultimately, they attack their enemies with their erect quills.

It’s important to note that porcupine quills are not poisonous and cannot be thrown. However, they cause injuries that can easily become infected. In fact, there are multiple cases of lions or snakes that have not been able to kill these animals. Other animals have also died as victims of infections caused by these animal’s multiple spikes.

In fact, in some isolated cases, these animals have killed big cats and hyenas, as well as humans. This is why you should always be extremely careful if you see one and avoid disturbing them.

Other curious behaviors of the crested porcupine

One of the most surprising things about porcupines is that they have no problem with getting wet. In fact, they even know how to swim. These are nocturnal animals and monogamous. They are also herbivores and eat roots, leaves, bulbs, and fruit.

Another of their most interesting habits is that they collect cones. Despite being herbivores, researchers have observed these animals collecting bones from other species and storing them. Researches believe that they use them for gnawing on. This allows them to wear down their teeth and ingest calcium directly.

Meet the Adorable Prehensile Tailed Porcupine
The prehensile tailed porcupine has a very interesting bulb-shaped nose that has whiskers. It goes perfectly with its ball-shaped body covered with quills.  Read more »
Link copied!
Interesting Articles
Animals
6 Animals that Can Suffer from Depression