The Fennec Fox: Native to the Sahara Desert

The fennec fox, also known as the desert fox, is one of the smallest canids on the planet. It's a clear example of adaptation, as it's able to face the hostile conditions of the Sahara Desert. 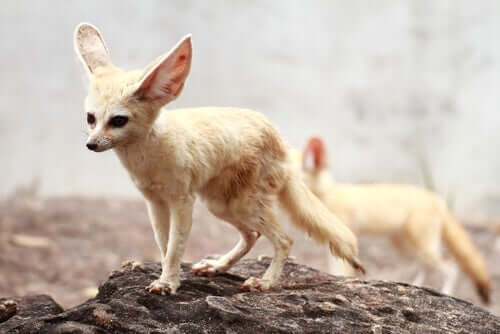 The fennec fox, or desert fox, is the smallest canid species of all. It’s a perfect example of environmental adaptation, given its ability to overcome the conditions of the Sahara Desert. Everything about its body, diet, and behavior prepares this animal to survive in one of the most extreme environments on the planet.

The characteristics of the fennec fox

The fennec fox is a fox species that lives in the north of Africa and extends across the entire Sinai peninsula. This particular type of fox is the smallest that exists. It weighs between 1.5–3.5 pounds, is about 8 inches tall, and measures a mere 9–16 inches in length. Its bushy tail, however, can be between 7 and 12 inches long.

As we’ve mentioned already, except for some extremely small dog breeds, like Chihuahuas and Pinschers, this is the smallest canid that exists.

The most characteristic feature of the fennec fox is its large ears, which are disproportionate to the rest of its body. These gigantic ears help the fox to radiate body heat and, therefore, stay cool despite soaring desert temperatures.

In the same way, these foxes’ legs are covered in long, thick hair. This hair protects them from the hot desert sand, and keeps them from getting burned. They also take advantage of this feature in order to dig in the sand and build their dens.

At the same time, fennec foxes are cream-colored, which allows them to blend in perfectly with their surroundings. Their chests, bellies, and the area under their tails are lighter, and the tip of their tails is black. Their hair is thick, which helps to protect them from solar radiation during the day. At the same time, it helps keep them warm at night.

The behavior of the fennec fox

This type of fox lives in small family packs. They mate for life, and both mother and father live alongside their young. Some, when they get older, abandon their packs, while others stay with their families for a few more months.

These animals are nocturnal. They spend their days underground inside their dens, which protect them from the sun and heat. Then, when the sun goes down, they venture outside. They dig their dens themselves and can even create tunnels that connect different burrows to one another.

Their enormous ears not only help them regulate their body temperature. They also have a keen sense of hearing that allows them to detect prey underground. Like many other foxes, they surprise their prey by jumping on top of them, but their hearing plays a fundamental role. They’re also able to dig in order to find their prey.

The diet of the fennec fox

Like many foxes, the fennec is an opportunistic omnivore. This means that it feeds on whatever it finds at the time, and, on occasions, will hunt. Its diet consists of insects, rabbits, or small birds, but it will also eat eggs, grass, and fruit.

These canids have adapted so well to desert life and they barely need to drink water. They obtain enough hydration from the plants and fruits they find. What’s more, they have a digestive system that allows them to take better advantage of liquids. Just the same, like any good opportunist, if they find an oasis, they won’t pass up the opportunity to drink.

The habitat of the fennec fox

The fennec fox’s habitat extends across all of North Africa and reaches Asia. You can spot them from the Atlantic coast of Morocco all the way to the Sinai peninsula.

However, the greatest population of these animals is located in the Sahara Desert, especially the areas belonging to Algeria. The southernmost territory where desert foxes appear is the border north of Niger.

Unfortunately, it’s important to point out that the destruction of their habitat is the biggest threat to these canids. Just the same, they’re not considered to be in danger of extinction.

The fennec is the smallest fox species that exists, and is also one of the smallest canids. However, it’s an excellent example of how an animal can adapt to the environment where it lives. Its color, diet, and extraordinary physical features allow it to live in one of the harshest environments on our planet.

The Arctic Fox: A Sociable and Territorial Animal
Also known as the polar fox, it lives at the most northerly point of our planet. In this article, we'll tell you all about the Arctic fox. Read more »
Link copied!
Interesting Articles
Birds
The Bali Myna: A Beautiful Critically Endangered Bird