The Griffon Belge: A Caring and Active Dog Breed

Today we want to tell you all about the Griffon Belge. This compact dog with an expressive face makes for a caring and loyal companion. 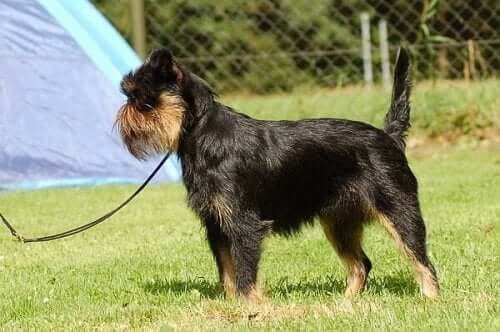 The Griffon Belge is a small-sized, friendly, caring, and even-tempered dog. It’s very similar to the Brussels Griffon, (Griffon Bruxellois) and the Petit Brabançon.

The origin of the Griffon Belge

As its name indicates, the origin of the Griffon Belge is in Belgium–more specifically, Brussels. The Griffon Bruxellois and the Petit Brabançon come from the same region. Despite the similarity among the three breeds, the International Cynological Federation (FCI) considers them three different breeds with a common ancestor, the Smousje.

It was during the 19th century that the genetic input of the Cavalier King Charles Spaniel and the pug gave this breed its characteristic short black hair. This ended up being what differentiated the Griffon Belge from its relatives: the Brussels Griffon and the Petit Brabançon. This is what gave the Griffon Belge its status as a separate breed.

The physical characteristics of the Griffon Belge

The Griffin Belge is a small and robust group 9 companion dog with a square-shaped body and a strong bone structure. However, despite its robustness, it has an elegant and balanced gait.

The breed standard doesn’t indicate what height these dogs should have. However, it does make reference to their weight as well as the proportion between their length and height. Their weight varies between 7.75  and 13.25 pounds, while the length of their bodies should be the same as their height at the withers.

As for their head, many say that the Griffon Belge has a very expressive face–almost human. Another aspect that stands out in this breed is that its head is quite large in comparison to its body, which leads us to believe that it’s an intelligent animal.

When it comes to its coat, the hair of the Griffon is thick, raised, and disheveled. It’s longer around the eyes, cheeks, chin, and on the muzzle, which gives the breed its nickname “the bearded dog”. Its beard and mustache start below the nose-eye line and go from one ear to the other. They cover the animal’s snout and cheeks with an abundant amount of hair, which is longer than on the rest of the body.

In regard to color, the Griffon Belge is characterized by a black coat with fire-colored spots. These must be pure and uniform in color, and they appear on the front legs from the animal’s feet up to its carpus. At the same time, the spots on the back legs stretch from the feet to its hocks.

These colors rise from the inner part of the animal’s legs. They also appear on the front of the animal’s chest, cheeks, chin, above the eyes, on the inside of the ears, and under its tail.

The nature of the Griffon Belge

According to the breed standards published by the FCI, the Griffon Belge is a small companion dog characterized by an even temper. What’s more, it’s always alert and can be somewhat active.

Griffon Belges are very friendly and caring, which can lead them to be somewhat attached to their owners. Given their small dimensions and calm nature, they adapt easily to urban life and small apartments.

The Griffon Belge is a small-sized dog with long hair. Therefore, it requires daily brushing in order to give shine and avoid hair loss and knotting. At the same time, in order to maintain its beard, eyebrows, and mustache, it’s a good idea to take these animals to a groomer on a regular basis. But that’s really only necessary if the Griffon will be participating in dog shows or if you want a more aesthetic appearance.

There are no particular illnesses or health problems that tend to affect this breed. Therefore, with proper nutrition, physical exercise, and regular visits to the veterinarian, your Griffon Belge will be happy and healthy.