Thermoregulation is defined as the biological ability to modify bodily temperature within certain limits. This mechanism is essential for life. In this article, learn all about thermoregulation in animals! 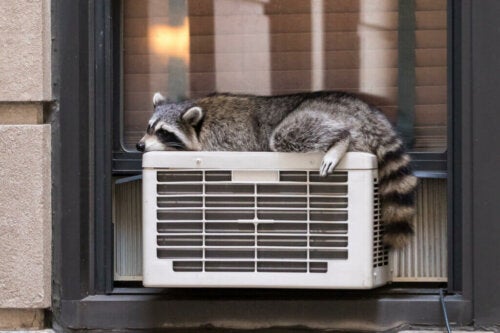 Animals don’t have woolen scarves they can wear during harsh winters, nor do they have fans they can use to cool off a bit when the heat hits. But there’s no need to worry, because they have adaptive mechanisms. Here, we tell you everything you need to know about thermoregulation in animals.

These have resulted from thousands of years of evolution and are responsible for keeping their body temperature as comfortable as possible.

Humans also have these mechanisms, but in a more rudimentary way. This interesting mechanism is called “thermoregulation”.

The concept of thermoregulation

Thermoregulation, as its name suggests, consists of regulating temperature, no more, no less. This concept refers to internal physiological mechanisms that regulate body temperature.

It’s been fundamental in the evolutionary race, as temperature is one of the determining factors that conditions the environment. An animal that isn’t able to regulate its body temperature couldn’t, for example, go hunting in very hot weather nor could it survive a good snowfall.

Thermoregulation as a classifying element

If you think about your high school biology classes, you probably remember the concept of “cold-blooded” or “warm-blooded” animals that your teacher explained to you.

However, these terms have become obsolete over time, since they don’t fully explain the concept they want to convey or all the possible scenarios that arose in nature. Therefore, the correct classification biologists have proposed are:

These are some of the mechanisms these animals use to regulate temperature:

These animals, including humans, increase their temperature with internal mechanisms and have tools to control it. Here are some of them:

Although they may seem different, they follow a similar principle: evaporative cooling. Animals with sweat glands cool themselves by producing sweat, which causes a drop in temperature when it evaporates. Panting animals make their temperature drop through evaporation from the tongue.

This mechanism is nothing more than an involuntary muscle contraction. When the muscles work, they produce an immediate temperature increase. It’s a shame that the contraction that occurs when we shiver doesn’t serve to get us into shape.

This system is really effective in regulating body temperature. When the outside temperature drops and the animal needs to maintain its temperature, peripheral circulation constriction occurs. Thus, less blood circulates in the extremities.

This is the mechanism that produces necrosis in the extremities when it’s very cold. For example, in mountaineers who become lost or trapped in a mountain. If vasoconstriction persists for a long time, blood flow is interrupted and the limbs aren’t irrigated. Thus, necrosis ensues.

The opposite system is vasodilation, which produces increased peripheral blood circulation. This dissipates heat and lowers internal body temperature.

As you’ve seen, there are many different thermal regulation mechanisms in animals. Nevertheless, we can divide animals into two large blocks according to the way they obtain heat: ectotherms and endotherms.

How to Lower Your Pet’s Temperature
A fever for a cat or a dog can have much more serious consequences than with humans. It's important to know how to react and how to treat it to reduce the effects. In this article, we'll tell you this and much more. Your pet's life could depend on this, so pay attention and find out how to lower your pet's temperature. Read more »
Link copied!
Interesting Articles
Amphibians
The Fire Belly Newt: Care and Characteristics