Find Out Why Dogs Bury Their Food

Despite the fact that we're talking about a completely domesticated species, dogs sometimes exhibit behavior they've inherited from their ancestors. With that in mind, we want to talk about why dogs bury their food. 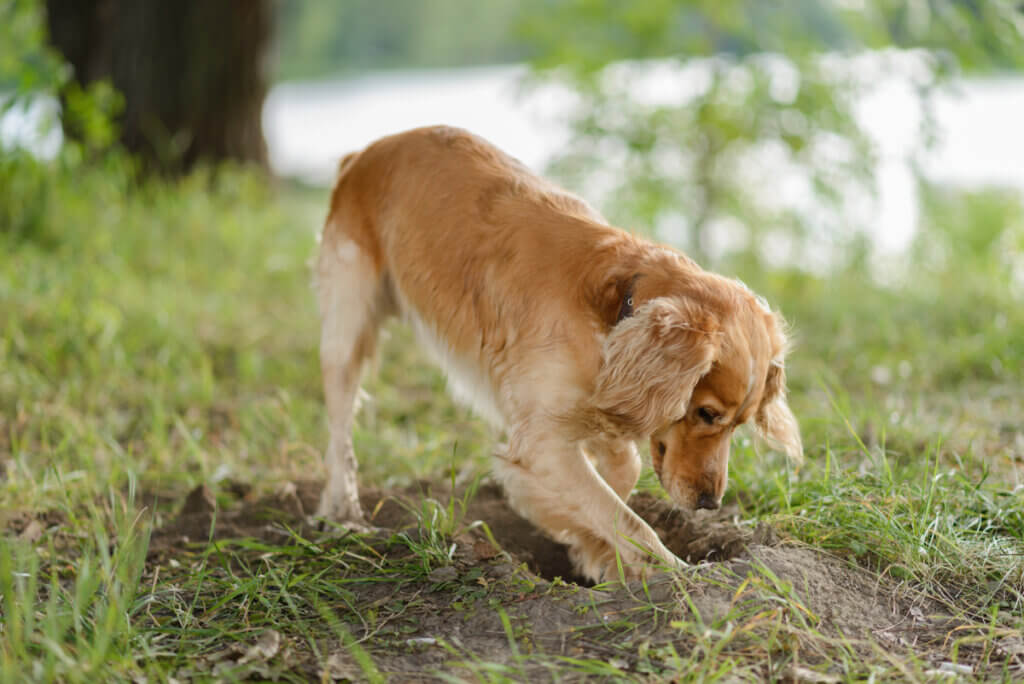 Have you ever wondered why dogs bury their food? From an anthropic point of view, this doesn’t make much sense. After all, domestic dogs always have food at their disposal, and they’re surely aware of this.

The main reason for this type of behavior is vestigial traits inherited from their ancestors. And dogs aren’t the only ones that manifest them, as we’re all aware of the example of the presence of wisdom teeth in a high percentage of the human population.

Regarding canine domestication and their ancestors

To understand this type of behavior, we need to go back to the phylogenetic tree and the evolutionary history of the domestic dog (Canis lupus familiaris).

Some genetic studies have tried to elucidate the history of the dogs that accompany us today. To our surprise, modern-day wolves and domestic dogs are two mutually monophyletic groups, that is, they’re clearly separated.

This means that the domestic dog is not genetically close to any current wolf population. Therefore, its ancestor (probably some type of wolf from the Pleistocene age) is already extinct.

Why is it necessary to define this type of evolutionary relationship? Well, for a start, we need to make it clear that, in many cases, when it comes to discovering domestic dog behavior, we shouldn’t turn to wolves. In any case, we would need to study the characteristics of its ancestor, which has long disappeared.

Why do dogs bury their food?

The American Kennel Club society gives us the answer. The provision of resources is a vestigial behavior in response to a habitat where food is scarce.

This term is known in English as surplus killing and occurs in many mammals. For example, polar bears, lynxes, foxes, killer whales, coyotes, raccoons, and of course, the domestic dog.

Food accumulation behavior has also been observed in wild wolf packs. For example, wolves bury their prey under the snow, where the meat is preserved for days to weeks. This is an evolutionary mechanism that’s easy to understand, as it responds to a need for food.

It’s very interesting to know that this habit of burying excess food also shows itself according to each dog breed. For example, dogs genetically selected for hunting seem to show a greater tendency to do so than sporting dogs.

Theories claim that this group of hunters show more of their “predatory instinct” on a daily basis. Therefore, it makes sense that vestigial behaviors such as surplus killing would be more evident.

For this reason, Dachshunds, Beagles, Basset Hounds, and Miniature Schnauzers are more likely to dig holes when they receive some reward.

Animals with full stomachs can store food for times when food is scarce.

What to do about this behavior?

Of course, punishing a dog for vestigial behavior that’s part of its genetic code doesn’t make much sense. The trick to avoiding this type of behavior is to channel the activity in another way.

For example, you can reserve a space for blankets or pillows where the dog can bury its toys and precious belongings. Another solution would be to give the dog its own litter box, where it can make holes without ruining the owner’s yard.

Boredom can also be an important factor that conditions this behavior. If the owner provides the dog with enough stimuli, it may not have to resort to its more instinctive side to channel energy. Therefore, games are always a good solution to behavioral problems.

Finally, it’s also recommended not to give bones and treats to dogs on a full stomach. This way, the dog won’t interpret those elements as an “excess of food”, reducing its desire to store them underground.

An inherited but positive behavior

As we’ve observed, the fact that dogs bury their food is completely normal and is because of a vestigial evolutionary trait. So, as long as it doesn’t become an obsession, punishing a dog for showing its most basic instincts could be counterproductive.

It’s important to remember that dogs require environmental enrichment and games that enhance their instincts, such as activities that promote the sense of smell. Allowing dogs to come into contact with their most ancestral selves from time to time is necessary for their happiness.

Why Do Dogs Follow Their Owners?
Dogs follow their owners everywhere and it's something we're used to, but do you know why it happens? Here we try to give you an answer. Read more »
Link copied!
Interesting Articles
Dogs
Which Dog Breeds Are Most Likely to Run Away?